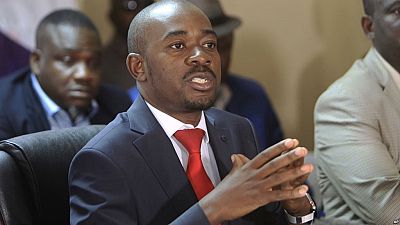 Zimbabwe’s main opposition leader has postponed plans for a mock inauguration on Saturday following a police ban on public gatherings as the country battles to contain a cholera outbreak that has killed 26 people.

Nelson Chamisa, leader of the Movement for Democratic Change (MDC), says he was cheated of victory by President Emmerson Mnangagwa in the July 30 election, the first since Robert Mugabe was removed in a coup last November.

#Zimbabwe opposition postpones #Chamisa ‘inauguration’: The #MovementforDemocraticChange (#MDC) has postponed the mock inauguration of its opposition leader, #NelsonChamisa, following a cholera outbreak that has killed around 26 people. pic.twitter.com/IwkyxlsRB9

Chamisa’s critics accuse him of trying to copy Kenyan opposition leader Raila Odinga, who took a symbolic presidential oath in a challenge to President Uhuru Kenyatta in January.

The mock swearing-in was set to coincide with the MDC’s 19th anniversary rally at a stadium in Highfield township, which is near Glenview in Harare, the epicentre of the cholera outbreak.

“The anniversary rally will go ahead at a later date to be advised and the venue will remain the same, Gwanzura stadium,” the MDC said.

Nearly 4,000 people have been infected with cholera, which has been declared a health emergency in Harare.

Zimbabwe’s new Finance Minister Mthuli Ncube has set up an emergency crowd fund to raise money to fight the outbreak.

The World Health Organization and the Red Cross said on Thursday they were ramping up their emergency response to Zimbabwe’s deadliest cholera outbreak in a decade, with politicians trading blame over contaminated water and collapsing infrastructure.