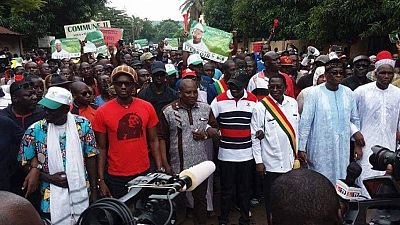 Supporters of the Mali’s opposition candidate Soumaïla Cissé demonstrated in Bamako on Saturday to protest the re-election of President Ibrahim Boubacar Keïta.

The opposition supporters claimed that Keïta’s re-election was “illegal”, just two days after announcement of the official results.

The protesters gathered in front of Mali’s Chamber of Commerce holding posters of Soumalia Cissé. The protest was led by popular radio personality Ras Bath who resonates with Malian youths.

“Today, the people of Mali have decided to take matters into their own hands. We have seen what happened last time, the minister in charge of the election has given incomplete figures, which is why today we are here, to show the people of Mali, the international people, the international community, that what has been said is wrong’‘, said Ousmane Traore, President of the young leaders of Mali.

The protest was supervised by the police and attended by Soumalia Cissé.