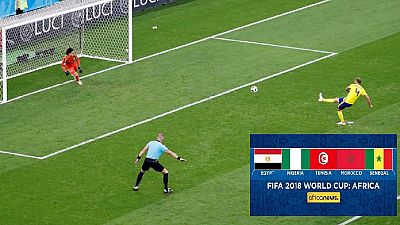 Football’s cruel mistress, the penalty shootout, arrives at the World Cup on Saturday after a packed fortnight of group games, ready to dispense her characteristic doses of unbridled joy and heartbreak in the knockout stages.

There has been a penalty shootout at every World Cup since 1982 in Spain, and while it is still a matter of contention whether this is the best way to decide a winner, the post-match shootout is now common at all levels of the game.

But the consequences of failure are nowhere more devastating than at a World Cup, where two previous finals and five semi-finals have been decided by the gut-wrenching lottery of penalties.

Penalty drama at the World Cup

Inevitably it is the misses that are best remembered, none more so than Italy’s Roberto Baggio blasting over the bar to hand Brazil the World Cup in 1994 or Chris Waddle with a similarly wild and wayward effort for England in the semi-final four years later.

In all, 26 World Cup clashes have needed penalties to produce a winner, although only twice have they gone past the first stage of five kicks each.

Of the 16 teams in the second round in Russia starting on Saturday, all but four have had past experience of a World Cup shootout.

Argentina should be the most confident, having been involved in more World Cup shootouts than any other country and winning four out of five.

Brazil have won three of four, including the 1994 final in Los Angeles, and France two of four, losing to Italy in the deciding game in Berlin in 2006.

But for the likes of England, Mexico and Switzerland the prospect of progress in Russia hinging on spot kicks will verge on the terrifying.

England have lost all three of their shootouts, and Mexico two out of two. The Swiss, bucking the national stereotype of calm efficiency, failed to convert any of their kicks in their one previous shootout, going out to Ukraine in the last 16 in Cologne in 2006.

For Colombia, Croatia, Denmark and Russia it will be a new World Cup experience if they are forced into the post-match tie breaker, although the Danes succeeded in the semi-finals on their way to their shock European Championship success in 1992.

In the entire World Cup finals history, there have been a total of 240 post-match penalties taken, with 170 of them scored.

That is a decent conversion rate given the gut-thumping tension that always goes with the shootouts. The stress of nail-biting fans in the stands has nothing on the pressure felt by the players involved, many of whom often cannot bare to look while their colleagues step up to take their shots.

Penalty shootouts were first introduced at the 1978 World Cup but were not needed until four years later. Before that, an even more unsatisfactory toss of the coin was used to break the deadlock.

One consolation for the teams now faced with the prospect of penalties in Russia is that they will not have to face Germany.

Their 100 percent record in World Cup shootouts remains intact due to their unexpectedly early departure.