[Photos] Russia welcomes Tunisia, Morocco and other teams for the World Cup 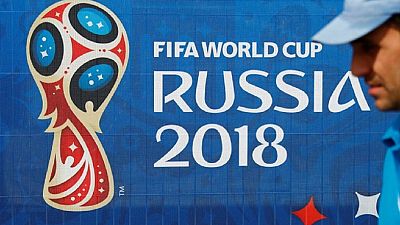 With less than three days to the opening match of the 2018 World Cup in Russia, many teams are making their way to their respective camps in the host country.

From Africa, the Egyptian Pharaohs and the Tunisian Eagles have arrived in Russia, joining other teams including France, Croatia, Brazil and Iceland among others.

Christiano Ronaldo’s Portugal side arrived in Russia on Saturday, ready to make yet another attempt at winning their maiden World Cup trophy. Portugal face 2010 world champions Spain, African side Morocco and Iran in Group B.

Overnight, we welcomed EnMaroc to Russia for their first #WorldCup since 1998! ??⚽️ pic.twitter.com/dEGbsom7z6

Here for their first #WorldCup and determined to make their mark.

footballiceland trained at their base camp in Russia for the first time ahead of their first ever #WorldCup matchpic.twitter.com/KguAxVIzLk

The first Asian team to play in the opening match of a #WorldCup are here!

Saudi Arabia who will be playing against hosts Russia in the World Cup’s opening game on Thursday have also arrived. They will be the first Asian team to play in a World Cup opening game. Completing Group A are Mohamed Salah’s Egypt and South American nation, Uruguay.

Two more teams have arrived for the #WorldCup…

Australia, who will be taking on 1998 world champions France, Peru and Denmark in Group C have also touched down in Russia.

Five time world champions Brazil, who are regarded by many as 2018 World Cup favorites, arrived in Russia on Sunday night.

Look who arrived overnight in Russia ?

More teams are beginning to arrive for the #WorldCup!

? #TUN have arrived at their Moscow Team Base Camp ?

They begin their #WorldCup campaign against England next Monday! pic.twitter.com/njGrfzUeGA

Tunisia who begin the ir campaign against England on June 18, are now settling in at their Moscow Base camp.

The World Cup kicks off on Thursday and you can follow all the latest news, results and coverage of the World Cup on our dedicated page dubbed ‘Mondial 2018’.