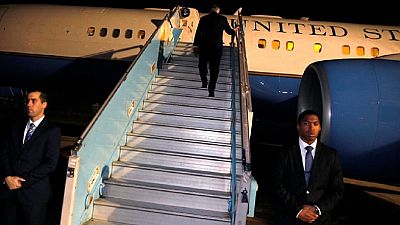 From the outset, Rex Tillerson’s first trip to Africa looked half-hearted and token, but with the hindsight knowledge that the U.S. Secretary of State was fired just two days in, his African hosts who must be wondering why they bothered.

Beyond $533 million in humanitarian aid and some pat remarks about security and not getting too cosy with China, Tillerson’s main aim appeared to be clearing up the mess left by President Donald Trump’s reported dismissal of some African nations as “shithole countries”. Trump later denied making the comment.

A summary of Tillerson’s Africa tour

But the revelation from a senior White House official that Trump told Tillerson he was out of a job just two days into the six-day jaunt has cast doubts in the minds of many about the Trump White House’s attitude towards the continent.

It’d be better for Africa if the Trump administration just ignored us because of the chaos and dysfunction within the administration.

Only hours after he touched down in the United States after cutting short his African trip, Trump announced on Twitter that Tillerson was fired.

What next for US – Africa relations?

Given the continent’s increasing reliance for aid and trade on China, its main commercial partner, and a recent diplomatic push led by Russian foreign minister Sergei Lavrov, the slight is likely to have real consequences for Washington’s status on the continent of a billion people.

“This shows Trump’s disdain, a real own-goal, especially with Lavrov hot on his heels,” said Jackie Cilliers, head of the South Africa-based Institute for Security Studies.

For Kenya’s chattering political classes, it was a telling window into the priorities of the Trump White House.

“It’d be better for Africa if the Trump administration just ignored us because of the chaos and dysfunction within the administration,” said Nanjala Nyabola, a Kenyan writer and political analyst.

“It’s interesting and disturbing to see the administration flounder so much and not really have a coherent response to any major challenges on the continent and elsewhere.”

A spokesman for Kenya’s president declined to comment. Nigeria’s foreign ministry did not respond to a request for comment.

In Nigeria, where Tillerson held talks with President Muhammadu Buhari on Monday, the secretary of state’s ousting was met with a sense of weary acceptance.

“American foreign policy has always treated Africa as a leftover, which is why it’s not a huge shock that Tillerson was in Africa while they fired him,” said Pat Utomi, professor of political economy at Lagos Business School.

“It doesn’t augur well for the long-term message of America to Africa, especially with the message he sounded, which was ‘beware of China’. This means that the warning he was giving was of no consequence,” said Utomi.