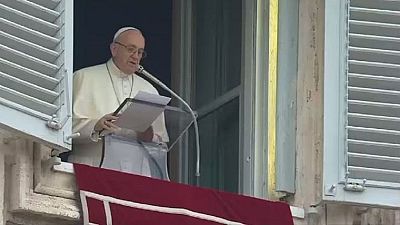 Pope Francis on Sunday expressed his proximity to the Coptic community of Egypt, struck on Friday December, 29 by two attacks on a church and a shop and prayed that God may “convert the hearts” of the violent.

Francis prayed for the victims of attacks on Copts in Cairo where a gunman killed at least 11 people on Friday in two attacks, one on a Coptic Orthodox church and the other on a Christian-owned shop near Cairo before he was wounded and arrested.

“Dear brothers and sisters, I express my closeness to the Coptic Orthodox brothers of Egypt, struck two days ago by two attacks on a church and a shop in the suburbs of Cairo. May the Lord welcome the souls of the dead, support the wounded, their families and the whole community, and convert the hearts of the violent,“the Pope prayed.

I wish everyone a good Sunday and a peaceful year end. I thank you again for your wishes and your prayers and please continue to pray for me. Good lunch and good-bye!.

The pontiff also wished all people a peaceful year end. Later this evening he will preside over a New Year’s Eve vespers service in St. Peter’s Basilica and then make a stop before the nativity scene in St. Peter’s Square