G5 Sahel force to be strengthened 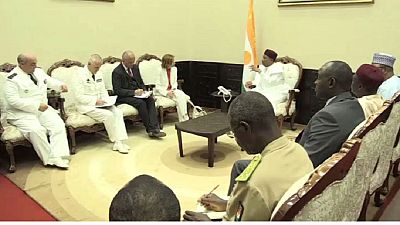 French defense officials say troops of G5 countries are capable of finding solutions to the various jihadist attacks in in the Sahel region.

French minister of Armed Forces Florence Pally made the remarks shortly after visiting an anti-jihadist command centre in Niamey.

Armed jihadists have been active in the Sahel since the 1990s, but this region gained notoriety in March 2012 when AQIM, and Ansar Dine overtook northern Mali.

“We are convinced that the G-5 Sahel force will find the solutions to the problems of the region even if operation Barkhane continues”, Florence Parly, French minister of Armed Forces said.

Accompanied by his German counterpart, Florence Parly later met with the President of Niger.

During talks she reassured Issoufou about France’s readiness to support the force.

According to the French minister, the first operations are expected to begin as early as October. They count on the financial commitment of other European Union countries.

“We will convince donors during our mid-September meeting in Berlin for a donors Conference to agree on the means which will be made available to the Joint G5 Sahel Force,” she added.

The call for donations has been launched. Experts say this force requires at least 400 million euros and will start with about 5.000 men to be provided by Sahel countries.