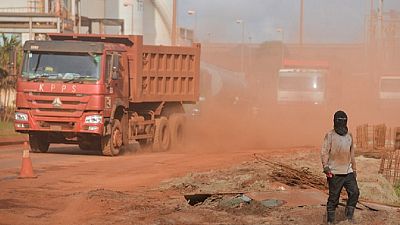 The unrest broke out on Monday night in the city of Boke, home to mining companies Societe Miniere de Boke (SMB) and Companie Bauxite de Guinee (CBG) which each export around 15 million tonnes of the aluminum ore annually.

“It’s a problem with electricity that aggravated the situation. We are working on finding a solution to the problem,” said Saadou Nimaga, secretary general at Guinea’s Mines Ministry.

A police source said anti-riot police had been sent to rein in the protests on Tuesday. Mining activity has fueled tensions in cities such as Boke, where much of the population remains poor and unemployed despite Guinea’s mineral riches.

The West African nation possesses about a third of the world’s bauxite reserves.

A senior company official, who asked not to be named, said the riots had caused a slowdown of activities at CBG, which is 49 percent owned by the Guinean state and the remainder by Alcoa, Rio Tinto Alcan [RIOXXA.UL] and Dadco.

Representatives for SMB were not immediately available for comment. The company is owned by Chinese firms Winning Shipping Ltd and Shandong Weiqiao [SDWQP.UL] along with UMS International Ltd and Guinea. The Chinese firms did not respond to requests for comment.

“It’s nearly the whole city that has risen up against the pollution and power cuts,” said another mining company official who asked not to be named because he was not authorized to speak to the press.

Speaking in Beijing, Chinese Foreign Ministry spokesman Geng Shuang said the unrest had no direct connection to the operations of Chinese companies on the ground.

China hopes the situation is appropriately resolved, he told a daily news briefing.