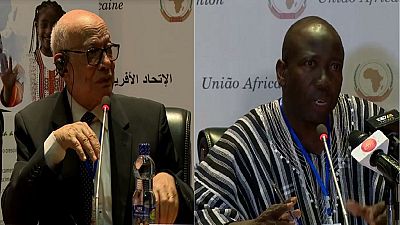 The two scientists were presented the $100,000 prize each on Monday at the 28th African Union Summit in Ethiopia’s capital Addis Ababa.

Ghanaian Felix Dapare Dakora is a Plant and Soil Biotechnology Professor at the Tshwane University of Technology in Pretoria, South Africa.

Professor Dakora won the award for his work on the interaction between legumes and social micro-organisms allowing bacterium to convert the 78% of nitrogen gas in the atmosphere into forms that plants can use among other benefits.

“Because fertilizers are very expensive, we try to actually identify leguminous species which when associated with the soil bacteria can produce a lot of nitrogen,” he explained at a press conference after receiving the award.

Egyptian Ali Ali Hebeish who is an Emeritus Professor of Textile Chemistry won the award for his contribution to the production of suitable textile fibres for apparels, furnishing and technical purposes like lining water canals and medical threads among others.

81-year-old Professor Emeritus Hebeish has over 360 publications to his credit and accredited with 9 patents and 9 books.

The prestigious award was instituted to raise the profile of the science and technology sector in Africa as a whole and thus contributing to Africa’s sustainable development, poverty alleviation and integration efforts.

Below is a video of the awardees explaining the work they do.