Nigeria lawmakers agree to offer asylum to Jammeh if he quits 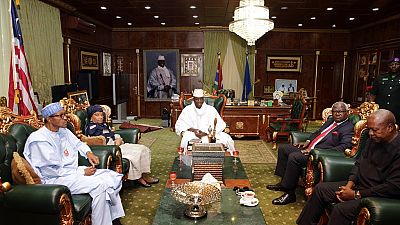 Nigeria’s lower house of legislature, the House of Representatives, has voted to offer Gambian President Yahya Jammeh asylum provided that he agrees to step down on January 19 when his tenure ends.

The motion was tabled by a lawmaker who chairs the committee on refugees. According to Mohammed Sani Zorro and the majority who shared his view, granting Jammeh asylum will be in the interest of peace efforts in the tiny West African country.

Other representatives who kicked against the motion were of the view that the move will send the wrong signal and send an unhealthy precedent to other autocrats across the continent.

They affirmed their support for the Economic Community of West African States (ECOWAS) mediation efforts and also called on Jammeh to “respect the will of the people”, who voted for opposition candidate Adama Barrow in the December 1 election.

.SpeakerDogara clarifies the intendment of the motion, stating that it is easier to grant asylum than to send troops or receive refugees/

/in view of the challenges with fighting Boko Haram and managing the humanitarian crisis in parts of the country.

Nigerian President Muhammadu Buhari, who heads the ECOWAS mediation, should consider “offering outgoing President Yahya Jammeh a safe haven in Nigeria to live securely as a way to end the political stalemate in the Gambia,” they added.

The motion, however, does not bind the government and did not prompt an immediate response from Buhari, who is expected to visit Banjul on Friday for talks with Jammeh.

Yahya Jammeh, had initially accepted the outcome of the polls only to reverse his decision citing irregularities as admitted by the electoral body. He has in a recent address vowed to challenge the results in court and warned that he would not leave the power until his complaint was heard by the Supreme Court.

The top court was unable to constitute a bench to listen to the poll petition by Jammeh’s party. The Chief Justice said the parties had to wait till May to get judges to sit on the case.