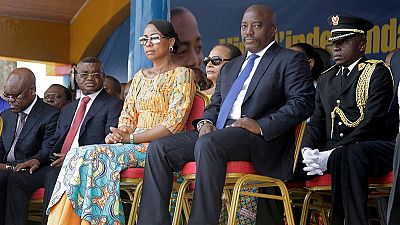 Since the end of the civil war in the Democratic Republic of Congo in 2003, the family of the outgoing President Joseph Kabila is reported to have flourished by owning at least 70 companies.

According to a Bloomberg report published on Thursday, December 15, 2016, the scope the Kabila empire has recently become visible after Congolese regulators computerized and made corporate and government records publicly available.

“Bloomberg News, with support from the Pulitzer Center on Crisis Reporting, traced the Kabilas’ interests by amassing an archive of hundreds of thousands of pages of corporate documents that shows his wife, two children and eight of his siblings control more than 120 permits to dig gold, diamonds, copper, cobalt and other minerals,” said the report.

“Two of the family’s businesses alone own diamond permits that stretch more than 450 miles across Congo’s southwestern border with Angola. Family members also have stakes in banks, farms, fuel distributors, airline operators, a road builder, hotels, a pharmaceutical supplier, travel agencies, boutiques and nightclubs. Another venture even tried to launch a rat into space on a rocket,” it added.

The report, which included a diagram showing a network of names and companies linked to the President’s family, said the family also has dozens of joint ventures and shell corporations through which it holds stakes to varying degrees in all manner of industries.

“That creates a system so pervasive that even seemingly innocuous payments—such as rent paid by the UN for a police station—end up finding their way to the Kabila family, an analysis of the network shows,” it said.

Bloomberg attempted to speak to President Kabila on the issue through the government spokesman Lambert Mende and the family’s aid Theodore Mugalu, but was in vain.

“Government spokesman Lambert Mende said he couldn’t comment on issues concerning the president’s family, which he considered a private matter. When asked how Bloomberg News could direct questions to Kabila, he said the president does not talk to Western media,” the report stated.

“Why is he refusing to go? For the sake of power? To protect the family business? Probably a bit of both,” it questioned.

Kabila came into power in 2001 when he was 29 years old after his father, Laurent Kabila, who served as president since 1997 was assassinated by his own bodyguard.

Kabila is required by constitutional term limits to step down when his second mandate ends on December 19 but a constitutional court ruled that he can stay on until a new successor is elected.

Elections have been postponed to April 2018 after the electoral commission complained of inadequate resources to conduct the process.

The opposition accuse Kabila of manipulating the system to cling on to power, while a faction of the opposition has agreed and through a national dialogue, got one of its members appointed Prime Minister.

The main opposition coalition led by Étienne Tshisekedi has organised series of protests met with violence by the police. They plan to hit the streets on December 19 to unseat Kabila.

World Bank data show that nearly two-thirds of the 77 million people in the Democratic Republic of Congo live on less than $1.90 per day.