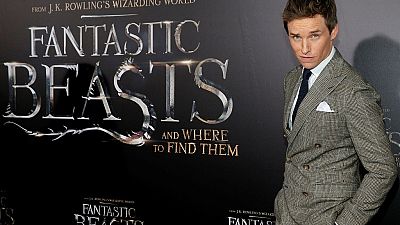 Fans of the Harry Potter franchise are in for a treat with the spin-off of author J.K Rowling’s latest work, ‘Fantastic Beasts and Where to Find Them’.

The five-part movie, written exclusively by Rowling for the silver screen, precedes the stories of the boy wizard Harry Potter by some seven decades.

Set in 1926 New York, ‘Fantastic Beasts’ tells the adventures of Newt Scamander (played by Eddie Redmayne), a graduate of the Hogwarts School of Witchcraft and Wizardry who makes a stopover in New York as part of a global excursion to research and rescue magical creatures.

Scamander’s suitcase which contains some magical creatures is accidentally swapped with a baker’s sample case of pastries and some of the magical creatures escape, a situation which could spell trouble for both the wizarding and non-wizarding (No-Maj) worlds.

Oscar-winning actor, Redmayne who played the eccentric yet introverted wizard enjoyed working with the famous author, who also co-produced the film.

“The amazing thing about J.K. Rowling is that she’s written characters and all, their back stories and lives are so thorough in her imagination. But for actors she gives us the complete freedom to come up with your own ideas. And to try things and fail and try again. So she was super collaborative,” he said.

Katherine Waterston who plays the down-to-earth witch Tina was equally excited about working on ‘Fantastic Beasts’, describing Rowling as enthusiastic about the project.

“She just seemed so excited that she’s seeing everything that she already saw in her mind out in front of her. I was so touched just to see that when we all met her,” Waterston said.

“Rowling’s magic is as potent as ever” according to reviews, that have described the movie as “action-packed and splendid-looking”.

Irish actor Colin Farrell who plays the Chief Security Officer for the Protection of Wizards at the American Ministry of Magic said: “As a 40-year-old man I could go and just get soaked in the expression of the imaginastic world that she’s created. So I would imagine that kids and parents and adults can all enjoy it, I hope.”

Redmayne and his co-star Katherine Waterston, have also come in for critical praise with one critic welcoming “a really strong young female lead”.

‘Fantastic Beasts and Where to Find Them’ is on global release from the 16th of November.