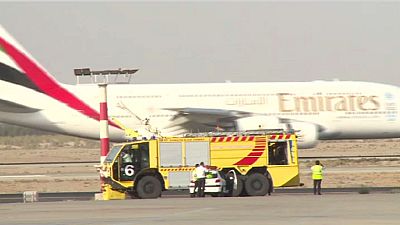 Dubai based airline, Emirates on Sunday resumed flights to Guinea’s capital Conakry more than two years after the service was suspended following the outbreak of the deadly Ebola virus in the west African region.

Emirates said the flight to Conakry will be linked to the carrier’s four times weekly service between Dubai and Dakar.

A Boeing 777-300ER aircraft was introduced on Dubai-Dakar route on Tuesday, August 2, ahead of the relinking of Conakry, to provide additional capacity.

In addition to passenger operations, Emirates SkyCargo will also reintroduce its services and offer about 20 tonnes of cargo capacity per flight for key exports such as seafood, fruit, vegetables and textiles, and imports of mobile phones, pharmaceuticals and mining equipment.

The resumption of services to Conakry means the airline is now serving 28 destinations in Africa.

The carrier currently flies to around 150 destinations worldwide.