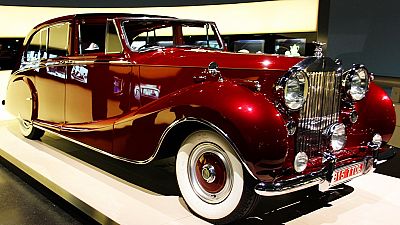 The shores of Lake Como in Italy was the place to be for vintage car enthusiasts as it played host to the 87th “Concorso d’Eleganza Villa d’Este”.

The event which started in 1929, was suspended after the second world war before being revived in 1995.

It is currently one of the world’s major events for vintage cars.

And after he got the car and after he finished filming in Cornwall, he made a journey all around Europe with this car, and he stayed here for 18 months and duri

Classic cars which once belonged to Hollywood’s legends such as Clark Gable and Steve McQueen were among dozens of vintage vehicles on display at the Concorso this year.

“The car was delivered to him on the film set in Cornwall by Jaguar itself,” he said.

“And after he got the car and after he finished filming in Cornwall, he made a journey all around Europe with this car, and he stayed here for 18 months and during this time he drove all the time this car,” Oliver added.

The new owner of the famous actor’s black Ferrari 330 GTC, Carlo Confidati has maintained the original number plate and worked to maintain the car as close to its original look as possible.

“We tried to leave it in exactly the same condition as it was back then, and it hasn’t changed much. It has very few kilometres on it. Mastroianni was a car enthusiast and often changed vehicles. Many of them were dark in colour because he found that elegant,” said Confidati, the new owner.

American actor Steve McQueen who was a Ferrari fan, had a Ferrari 275 GTB/4 delivered to him in 1967.

Originally a hazelnut brown colour, McQueen changed the colour to suit his taste and his choice of colour has remained to date.

Michael Pearce who represented the owner of the car at the Concorso explained that McQueen “hated on sight” the hazelnut gold brown colour of his Ferrari so he “instructed his favoured paint shop at the time to propose a new colour. ‘Chianti red’ was the colour that was proposed, which McQueen agreed to. The car was then completely repainted in the colour that you see it in today”.

This year’s Concorso d’Eleganza Villa d’Este was under the theme, ‘Back to the Future – The Journey Continues’.

It brought together some fifty vintage cars which span eight decades of vehicle history.

It also had a new addition – rally machines – which joined the decades old vintage show of elegant vehicles.