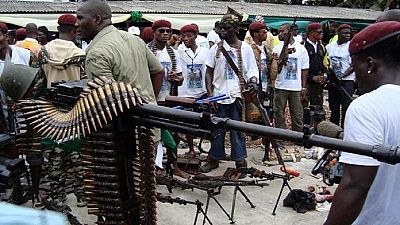 According to Saturday Vanguard, the fresh explosion occured near a military houseboat around Ogbe-Ijoh, headquarters of Warri-South-West local government area in Delta State.

This comes as president Muhammadu Buhari directs the Chief of Naval Staff, Admiral Ibok-Eke Ekwe Ibas to deal with the militants who destroy pipelines.

Three soldiers attached to the joint Task force (JTF) in the Niger delta, have also been allegedly killed in two detached boat tragedies in Bayelsa and Delta states.

The boat conveying the crew from Agip’s field capsized on their way from the site. The soldiers drowned and died before help could come, they were said to be using a hand-paddled canoe to cross.

An eyewitness said the tragic incident occured at about 1.30 pm adding that it was not an attack by militants that killed the soldiers.

President Buhari had on Friday directed the Chief of Naval Staff to deal ruthlessly with the Niger Delta Avengers, NDA and other militant groups in the area responsible for oil pipeline and gas installations explosions in the coastal region.