Danilo Medina has been reelected president of the Dominican Republic as results on Monday showed him ahead with a huge margin.

However, his victory was marred by deadly violence aggravated by the slow pace of vote count.

Medina swayed voters with a record of surging GDP growth and social projects that outweighed high poverty, high crime rate and accusations of graft in the Caribbean’s largest economy.

“I didn’t have to convince anybody because people are convinced. And they weren’t convinced because of me, but because of the works of the government of the Dominican Liberation Party,” Medina said in a speech at his campaign headquarters.

Final results were still not out more than 24 hours after polls closed on Sunday night, a situation electoral authorities blamed for the tension between candidates which led to six deaths and unrest in the provinces.

Television stations in the eastern city of Higuey reported of gunfire on Monday afternoon and said torched tyres were still burning at night.

According to the electoral board, with votes counted from 67 percent of polling stations, Medina had won 62 percent of the votes, exceeding the 35 percent of his closest rival, Luis Abinader.

Abinader has yet to concede defeat and said he would make his first comments after the election, on Tuesday.

The margin is large enough to avoid a runoff, a first for Latin America’s fastest growing economy, whose luxury beach resorts and golf courses make it the Caribbean’s most visited destination.

The remaining six candidates combined had about 3 percent of votes, including the first two women running for the presidency in the country’s election.

After Medina’s victory speech, celebrations broke out in the capital, with cavalcades of supporters blaring reggaeton music.

Medina’s Dominican Liberation Party has been in power since 2004, which critics said has led to corruption.

The Dominican Republic has about eight times the GDP of Haiti, its poor neighbor on the island of Hispaniola. 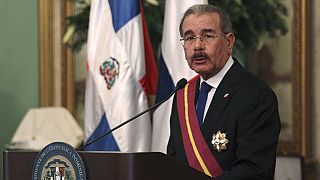