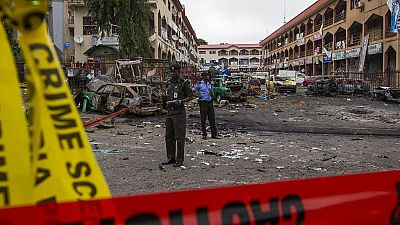 At least two people were killed on Thursday when a suicide bomber blew himself up in front of an official building in Maiduguri, Nigeria’s military has said.

The IED explosion at the Maiduguri Borno State Govt Secretariat killed the suicide bomber, 2 policemen and 18 people were injured.

According to the Nigerian military spokesman, Sani Usman, the bomber blew himself up when the security personnel denied him access into the regional government headquarters.

“Unfortunately, when we tried to stop him, he triggered the IED which was against his body, killing one policeman and seriously wounding another policeman (…) Unfortunately, the injured policeman subsequently died,” Usman said in a statement.

18 people were also injured in the blast, AFP reports.

Some vendors who were at the scene had earlier told AFP that they saw a scooter catch fire in front of the local government building.

Maiduguri, the capital of Borno State, is the historic stronghold of Boko Haram. This city has been the scene of repeated attacks since the start of the Islamist insurgency in 2009.

The presence of the military in the region and a significant police presence has brought about some calm in the town in recent months.

The last suicide bombing in Maiduguri was back in March, when two women blew themselves up in Molai on the outskirts of the city, killing 22 people and injuring 35 others.

The Boko Haram insurgency has claimed more than 20,000 lives since 2009, mainly in the north-east Nigeria.