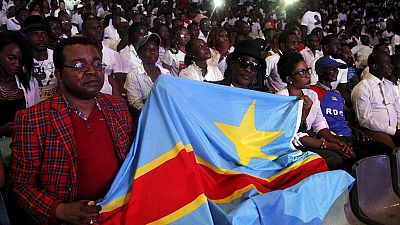 The award known as of ‘‘Grand Officer,’‘ is the highest distinction in DRC’s National Order. It was conferred on the occasion of the solemn funeral at the People’s Palace where people from all walks of life had gathered to pay tribute to the late singer.

Joseph Kabila, who bowed to the mortal remains of Papa Wemba said the award of highest honor was “on merit, based on loyalty and distinguished service to the nation, to Africa and the world where he (Wemba) had held high the banner to assert Congolese culture.”

...on merit, based on loyalty and distinguished service to the nation, to Africa and the world where he (Wemba) had held high the banner to assert Congolese culture.

After the ceremony, there was a wreath laying session by the constituent bodies of the Republic and the various personalities present at the People’s Palace.

A representative of the musicians group, Nyoka Longo Jossart, family member of Papa Wemba, his daughter and the DRC’s Minister of Culture and Arts each had five minutes to pay tributes to Wemba.

A religious ceremony is also scheduled at the Palace of the People. His body would be transferred to an exhibition at “Village Molokai” on the Kanda-Kanda Avenue in the commune of Kalamu, a facility founded by Wemba.

Tuesday, May 3, is dedicated to the laying of wreaths, remembrance, music and entertainment, also at the People’s Palace, an event open to the public.

On Wednesday, May 4, it is expected the funeral oration will be offered by the governor of Kinshasa, before he is finally sent for burial.

It would be recalled that the Ivory Coast organized a similar ceremony at which Papa Wemba was awarded a similar national honour posthumously during an artistic evening at the Palace of Culture in Treichville (Abidjan).

The man referred to as the King of Congolese Rumba died during a performance at a music festival in Ivory Coast. He is credited with putting African music on the global scene and was morned by several members of the music fraternity.