Obama meets Raul Castro in the heart of the revolution 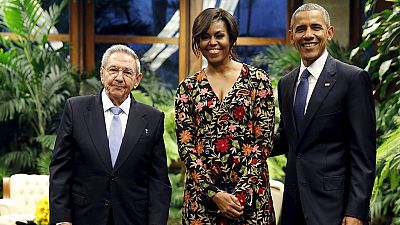 On the second day of his historic visit to Cuba, President Barack Obama met with Raul Castro reaffirming his commitment to renew ties with the communist regime.

In a rare handshake, the two men exchanged few words with reporters before going to a closed-door meeting, 15 months after he and Raul greed to end more than 50 years of ‘Cold War-era animosity’.

This is the third time the two leaders are meeting but this meeting is said to be crucial to normalizing relations between the two countries.

Earlier, President Obama visited the heart of revolution, the Plaza de la Revolucion and laid a wreath at the monument of Jose Marti.

This is the first visit of a US president to the country in 88 years; human right issues and economic reforms is high on the agenda.

President Obama has urged Congress to lift the 54-year-old embargo on Cuba, a move praised by the Cuban government.

On Tuesday, President Obama will deliver an address on a live Cuban television after attending an exhibition game between the Cuban national team and Major League Baseball’s Tampa Bay Rays.