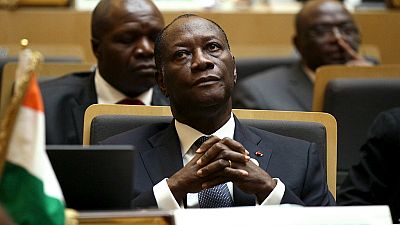 Ivorians will no longer have to go on trial at the International Criminal Court. That is because the county now has a functioning justice system.

President Alassane Ouattara made this disclosure when he met his French counterpart, Francois Hollande in Paris on Thursday.

The short meeting between the two leaders at the Elysée palace was to discuss several issues including the fight against terrorism after recent attacks in Ouagadougou and Bamako.

President Ouattara however used the opportunity to convey another message.

“The ICC has played the role it should” said the Ivorian Head of State.

“Coming out of the electoral crisis, we did not have justice, the country was completely in tatters … Now we have a justice system that is operational and has begun to judge everyone without exception” he said.

Mr. Ouattara’s comments come on the back of the ongoing trial of his predecessor, Laurent Gbagbo who is currently on trial at the Hague with his militia leader, Charles Blé Goudé for their alleged involved in the post electoral violence of 2010-2011 which lead to the deaths of over 3,000 Ivorians.

The two are facing four counts of war crimes and crimes against humanity.

The International Criminal Court’s Prosecutor has assured her outfit will investigate the Ouattara camp as well for the post-election violence.