The former Cape Verdean Prime Minister Jose Maria Neves, won the presidential election in the first round on Sunday in this archipelago cited as an example of democratic success in West Africa, according to provisional results published on an official website.

Mr. Neves, 61, a member of the African Party for the Independence of Cape Verde (PAICV) and head of government from 2001 to 2016, won 51.5% of the vote, an absolute majority needed to be elected in the first round, according to the results from 97% of polling stations.

He is well ahead of Carlos Veiga, of the Movement for Democracy (MpD, center-right, majority in parliament). Mr. Veiga, 71, another former prime minister from 1991 to 2000, obtained 42.6% of the vote, according to the same results.

Mr. Veiga admitted defeat in front of the television and congratulated his opponent.

These results have yet to be validated by the electoral commission.

The president's scope of action is limited. Cape Verde has a semi-parliamentary system with a strong emphasis on the Prime Minister, the government and the parliament.

Mr. Neves' long tenure as Prime Minister was marked by the establishment of relations with China, the signing of a treaty with the European Union, and the introduction in 2008 of a predominantly female government.

A total of 398,864 Cape Verdeans, including more than 56,000 abroad, were asked to choose a candidate from a record seven contenders, all men, to lead this volcanic archipelago in the Atlantic off Senegal.

The aim was to designate the fifth head of state of independent Cape Verde following Jorge Carlos Fonseca, of the MpD. Elected in 2011 and re-elected in 2016, he was unable to run for a third consecutive term.

Since the introduction of a multi-party system in 1990, 15 years after independence from Portugal, the PAICV and the MpD have shared power and practiced a smooth alternation of power.

Mr Neves takes over a country of 550,000 people with one of the highest GDP per capita in West Africa and years of sustained growth.

But the economy, which is 25% dependent on mainly European tourism and also on remittances from the large diaspora and development aid, has been hit hard by Covid-19. The pandemic has accentuated the effects of a drought that has worsened in recent years.

Carlos Veiga also lost in 2001 and 2006 to the PAICV-backed candidate, Pedro Pires. 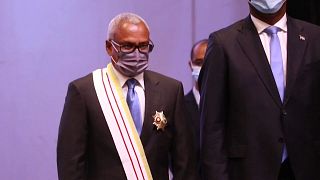