Jayla and Troy Pina will be representing their mother’s home country, Cape Verde, at the 2021 Tokyo Olympic Games.

Although they've never been to Cape Verde, the sibling made the swim team, a sport where Africans are underpresented and It’s all thanks to a Facebook post.

_"Super excited to be able to be the first female to represent Cape Verde, or first person, actually, at the Olympics for swimming. And so it’s just awesome to be able to get our name out there, especially in the swimming world, which many African countries don’t have the opportunity to do. So I’m super excited to put our name out there and let the world see" said _Jayla Pina.

Jayla and Troy made the team after a family member in Cape Verde contacted the swimming committee in 2017 with their swim times. A year later, the two swam for the first time for Cape Verde at a competition in Algeria.

"So being from America, and swimming for Cape Verde, it's definitely different, especially when we travel to Africa, and we swim at African championships. Most of those kids are from their country and born in their country, so for us it’s a little different being born in America. And it’s probably definitely noticeable to those other countries" expressed Troy.

They both have been spending countless hours training in the pool under the coaching of Brian Cameron, at Seekonk High School, in Mas sachusetts -- where the family is based.

"It’s been interesting. It’s been fun. The kids are doing well. From my perspective, not a lot has changed other than the fact that we travel to a lot of different places. I never would have been - I never would have gone to Africa had it not been for this. I never - probably never would have made it to Asia. Now you've got Japan coming up, and then the possibility of heading to Dubai and heading to Russia or heading to, you know, in 2024, heading to Paris" said  Brian Cameron, lead Coach with the Cape Verdean National Team. 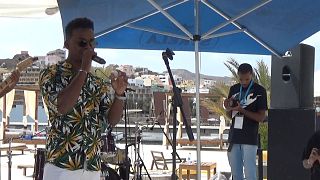