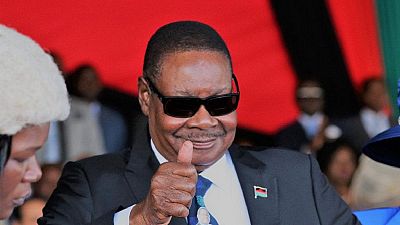 He has also written to his bankers asking them to lift the sanctions placed on his accounts.

In a December 2 letter to Standard bank, Mutharika’s lawyers tell Standard bank that a restriction order placed on the former president’s personal account had expired.

The letter implored the bank to allow him access.

Malawi’s Anti-Corruption Bureau (ACB) in August froze the personal bank accounts of Mutharika and his wife, Gertrude, in a probe seeking to uncover his role in a 5-billion kwacha ($6.6 million) cement scandal.

The bureau argues that Mutharika’s tax number was used to import cement duty-free between 2018 and 2019.

In 2014, Mutahrika’s predecessor Joyce Banda fled the country after being implicated in the so-called Cashgate scandal, in which government officials siphoned off millions of dollars of public money.

She returned to the southern African country from her self-imposed exile in 2018.

The Anti-Corruption Bureau has since said it has no solid evidence against the former president, partially clearing her name.

In July, his former bodyguard and the ex-head of Malawi’s tax body were in connection with the investigation.

In June, Mutharika lost his re-election bid to Lazarus Chakwera, an anti-corruption crusader. The election was a repeat vote after the country’s top court quashed the results of the May 2019 exercise which gave Mutharika and his Democratic Progressive Party (DPP) victory.

Mutharika is due to appear in court on December 22, according to the bureau.