How cheetahs and farmers can live together in Namibia 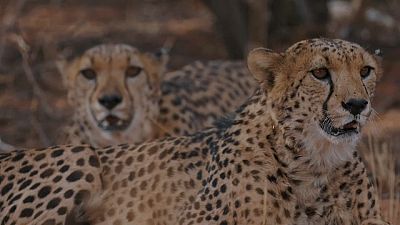 The cheetah is the rarest of the big cat species in Africa and the savannahs of Nambia are one of their last strongholds on earth.

But they are a farmer's worst nightmare because they hunt on agricultural land and prey on livestock.

A new study has found a way for the spotted creature and ranchers to live in harmony.

German and Slovenian researchers studied the behaviour of the animals by following 106 GPS-collared cheetahs over 12 years, from 2007 to 2018.

Researchers discovered that by studying the behaviour of the animals, they can reduce the number of opportunities the cheetahs have to prey on young calves.

He added "the population is threatened because it doesn't occur inside of national parks but on commercially used farmland. This obviously leads to conflict as the cheetah occasionally prey on livestock of the farmers."

By learning how cheetahs use the landscape has allowed ranchers to reduce the number of calves killed annually so that farmers avoid those areas.

The researcher discovered there were particular areas around certain trees that cheetahs would use as a communications hub. It was in these areas the herds were most at risk.

Lead researcher Dr. Bettina Wachter, also from the Leibniz Institute for Zoo and Wildlife Research said a minority of farms were heavily affected.

"It's about ten percent of the areas that is highly dangerous because of the concentrations of the cheetahs is very high," she said.

"So it's about 30 farmers that are affected more or less. There are farms which are covered by nearly half of their area with such a cheetah territory and there are farms that just have an edge of it, maybe ten percent."

The research on how cheetahs use the landscape has allowed some of the ranchers to reduce the number of calves killed annually by 86 percent.

This was mainly achieved by enabling the farmers to avoid areas in which the cheetahs congregated. Researchers call them communication hubs because the territorial males use these trees and also the others," said Wachter.

"So once we know where these territories are and the farmers know, they can really adapt the management to this, they know this is a high-risk area and they can just put their cattle to another place, always, this will not change," she added.