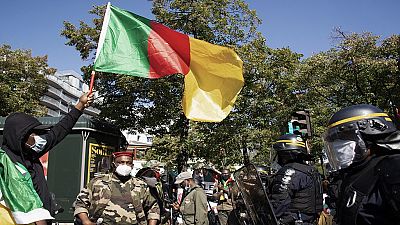 Security apparatus in Cameroon have arrested a man they suspect took part in the Kumba atrocities that lead to the death of seven children in a school.

The suspect, Ngwa Neba alias Commandant Zabbra, 24, was arrested Tuesday during an incidence when he tried to rob an elderly man.

The police have continued their hunt for the Kumba suspect since the incidence occurred on 24 October.

After a thorough questioning by the police, Neba Ngwa is reported to have confessed being a separatist fighter adding that he belongs to a gang of Ambazonia fighters based behind Government Bilingual High School Kossala, Kumba.

The suspect was later taken to the Senior Divisional Officer, Chamberlain Ntouo’u Ndong who said he is one of the gunmen to have participated in the massacre of seven kids at the Mother Francisca International Bilingual Academy last October 24.

Fighting between Cameroonian forces and separatist rebels in the English-speaking northwest and southwest regions has killed thousands. Both sides have been accused of committing atrocities.

No group has claimed responsibility for the attack but authorities have put the blame on separatist militia fighters.

Civilian installations as well as military ones have been targeted in Cameroon's conflict. Rights groups have accused government forces and militia fighters of committing atrocities.

Civilian installations as well as military ones have been targeted in Cameroon's conflict. Rights groups have accused government forces and militia fighters of committing atrocities.

On September 10, President Paul Biya announced the dialogue will be held later in the month in a bid to put an end to the conflict between security forces and armed separatists from the anglophone minority.

Scores of people have however been killed in the recent months with reports from the military saying gun battles have intensified in the northwestern towns of Kumbo, Ndop, Bamenda, Bafut, Kom, Mbengwi, Bambui and the south western towns of Buea, Kumba, Mamfe, Eyumujock and Mutengene.