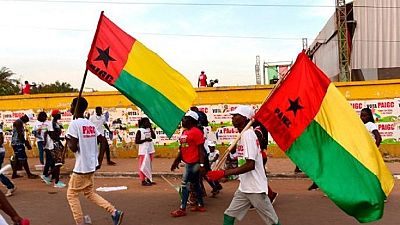 Guinea-Bissau has had two men swear in as president in two days. After the inauguration of Umaro Sissoco Embalo, the winner of the contested December vote on Thursday, Guinea’s parliament where the party of Embalo’s challenger Domingos Simoes Pereira holds a majority swore in Cipriano Cassama as interim president on Friday.*

In what promises to be a worse political crisis than the one under ex-president Jose Mario Vaz, Embalo dismissed Aristides Gomes as Prime Minister on Friday, and replaced him with one of his supporters.

“The Prime Minister, Aristides Gomes is relieved” of his duties, read the presidential decree No. 1 issued on Friday evening.

Military personnel surrounded the offices of Gomes on Friday, according to an AFP correspondent. On his Facebook page, the dismissed prime minister said it was ‘confirmation of a coup’.

Embalo swore himself in on Thursday despite an unheard case challenging his victory at the Supreme Court. Domingos Simoes Pereira filed the petition arguing that the vote had been rigged.

Guniea-Bissau, a small country in West Africa is no stranger to political crises. Former president Mario Vaz’s tenure was dominated by back and forth fights with Pereira and Gomes.

Many hoped that a new election would end the political bickering. If anything, it seems on track to worsen it according to observers.

The end to the previous deadlock, which led to the December elections was brokered by regional bloc ECOWAS;

Embalo is a former army general allegedly backed by Senegal. The national electoral commission said he won last December’s vote with 53.55% against Pereira’s 46.45%.

Pereira lost the run off vote despite winning the first round overwhelmingly.

Pereira’s party, the African Party for the Independence of Guinea and Cape Verde (PAIGC) has dominated Bissau politics since the country got independence from Portugal in 1974.