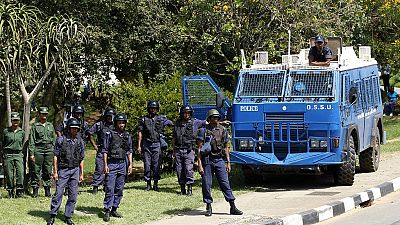 <p><strong>Police in eSwatini fired teargas and water canons on Wednesday at thousands of civil servants protesting against low pay and rising living costs in Africa’s last absolute monarchy.</strong></p> <p>Teachers and workers went on strike last week in the four main towns of eSwatini — a tiny southern African kingdom until recently known as Swaziland and entirely surrounded by South Africa.</p> <p>They accused King Mswati <span class="caps">III</span> of failing to provide sufficient wages, and flocked to the capital Mbabane on Friday to discuss action with opposition pro-democracy groups.</p> <h3>Protests</h3> <p>Frustrations boiled over into a series of protests around the country this week.</p> <p>More than 3,500 people marched in Mbabane and the neighbouring city of Manzini on Monday, and around 3,000 protesters showed up in the capital again on Wednesday.</p> <p>“Today we mean serious business,” said Mbongwa Dlamini, head of the Swaziland National Association of Teachers.</p> <p>An <span class="caps">AFP</span> reporter on the scene said police intervened when the crowd diverged from their authorised protest route.</p> <p>South Africa’s trade union federation announced “border protest action” in the neighbouring province of Mpumalanga on Wednesday “in support” of the eSwatini strike.</p> <h3>Demands</h3> <p>“The workers demand only 7.8 percent salary adjustment while the Mswati regime spends millions of rands for his lavish lifestyle,” said the Congress of South African Trade Unions (<span class="caps">COSATU</span>) in a statement.</p> <p>Wandile Dludlu, national coordinator of an eSwatini pro-democracy coalition, welcomed <span class="caps">COSATU</span>’s support.</p> <p>“This is (a) fight against both economic and social justice,” said Dludlu. “Protest action is not like a coffee session.”</p> <p>The government said earlier this month that it was unable to meet the protesters’ demands.</p> <p>“Government is in a challenging financial situation, hence (its) inability to award civil servants with a cost of living adjustment for the past two years,” Prime Minister Ambrose Dlamini said in a statement.</p> <p>King Mswati <span class="caps">III</span> was crowned in 1986, when he was just 18. He has come under fire for his expensive tastes, frivolous spending and prioritising his family’s needs.</p> <p>The king’s older daughter Princess Sikhanyiso was appointed as a member of cabinet last year, stoking outrage among pro-democracy groups.</p> <p>“She only goes to parliament when she has to collect her fat cheque,” Dludlu told <span class="caps">AFP</span> last week.</p>