Burkinabe lab to use sterile mosquitoes to fight malaria 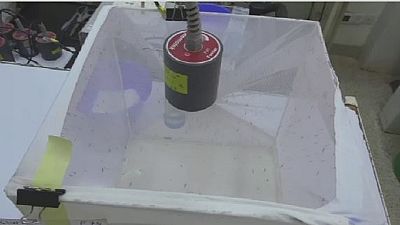 In a laboratory in Burkina Faso, a team of researchers alter mosquitoes. Five thousand genetically sterilized insects will be released in July. The aim is to help prevent the spread of malaria.

“The ultimate goal for Target Malaria is to develop a genetic fighting tool which is durable in the long term and affordable – that is cost efficient. So with this specific product, the goal is to release it in the field in the long term and to see the gene of specific interest spread across different mosquito populations and to reduce the density of these mosquitoes one way or another”, said Professor Abdoulaye Diabate of Target Malaria and IRSS.

Releasing sterilized mosquitoes would mean that female mosquitoes with which they mate will no longer produce offspring and the total population should naturally decrease.
In Burkina Faso, malaria is a public health concern. Last year, nearly 12 million cases of the disease were recorded with 4,000 deaths. 60% of which are children aged 0 to 5.

In the Souroukoudinga village west of Burkina Faso, Professor Diabate’s project has been welcomed.

“In the village we are all grateful for Target Malaria because we think the project will reduce malaria which is killing our sons and daughters. This project is not just for us, it is for the whole world. May God remove all those who are against this project. We pray a lot for its success”, said village chief, Pascal Traore.

But Burkinabe activists fear that this project funded by the Bill and Melinda Gate Foundation could have unintended environmental consequences.

“The future is very uncertain with these mosquitoes, the future is even catastrophic, the future is dark. Imagine these modified mosquitoes that are going to be unleashed on nature, (they) may be able to release pathogens, to release viruses which under normal circumstances they would not be able to harbor. It is an entire population that will be decimated, a whole eco-system that will be decimated and it can even go beyond the borders of Burkina (Faso)’‘, said Ali Tapsoba of ‘Terre De Vie’ environmental group.

Target Malaria says it consults communities adding, the research is supervised by national regulatory authorities and an independent ethics committee. The Burkinabe biosafety agency must give approval for a new experiment.