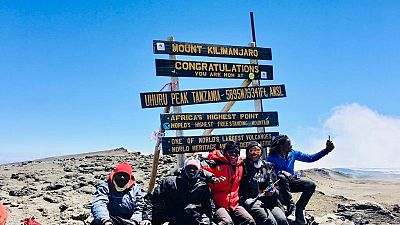 A group of South Africans over the weekend scaled Mountain Kilimanjaro in Tanzania as part of an upcoming summit dubbed Trek for Mandela, Trek4Mandela.

The journey up Africa’s highest point was made to coincide with Women’s Day (a national celebration) and the expedition was part of plans to raise funds to help a million girls through school.

The group was led by South Africa’s former Public Protector, Thuli Madonsela, their feat has since attracted a lot of commendation on social media platform, Twitter.

The Public Protector is the leading anti-corruption watchdog in the country. Madonsela is currently into advocacy surrounding social justice.

“22 of the 23 climbers made it to the rooftop of Africa, with one summiting Stella Point and the remaining 21 reaching Uhuru Peak.

“Post the summit, two of the team members fell ill with high altitude related sickness and were evacuated to a hospital. They were observed overnight, and both were released yesterday morning,” a media briefing read.

President Cyril Ramaphosa joined in offering congrats to the trekkers. The team has since returned to South Africa. “We applaud you for your efforts and affirm your success in this endeavour,” his message on Twitter read.

The Trek4Mandela is an Imbumba Foundation Initiative supported by Nelson Mandela Foundation and Caring for Girls group. The Foundation hosted an official welcome back and media debrief on Sunday, August 11.

“Life's most persistent and urgent question is, what are you doing for others?” MLK, Jnr.

Congratulations mama wethu, Prof. Thuli Madonsela and the Expedition Team on summiting Mt Kilimanjaro. Thank you for leading from the front and reminding us that together we can do so much. pic.twitter.com/Am1oWyXgB0

Thuli Madonsela & expedition team, led by mountaineer & adventurer, Sibusiso Vilane, has successfully summited Mt Kilimanjaro in commemoration of Women’s Day on 9 August. 22 of 23 climbers made it to the rooftop of Africa, with 1 summiting Stella Point & 21 reaching Uhuru Peak pic.twitter.com/6ejOGw9fAf