Close to 2 million pilgrims are in Saudi Arabia to undertake the annual Islamic pilgrimage, the Hajj, an at least once in a life time journey.

The country’s Hajj Ministry stated as at August 7 that a total of 1,843,961 pilgrims arrived in the country via three main points of entry.

In total some 2.5 million faithful will undertake the 2019 pilgrimage, according to local media. The figures show that about 700,000 locals are cleared to also participate.

Quota is fulfilled. Saudi Arabia ?? welcoming over 1.8M Muslims from around the world#TheKingdomEmbracestheWorld#Hajj2019 pic.twitter.com/FOZg5qrodi

The hajj, one of the world’s largest religious gatherings, is one of Islam’s five pillars. It consists of a series of religious rites which are completed over five days in Islam’s holiest city and its surroundings in western Saudi Arabia.

“We feel cleansed by achieving this pillar of Islam and meeting people from across the world. It’s marvellous,” said Mohamed Jaafar, a 40-year-old Egyptian pilgrim.

Africa’s showing at the Hajj

African countries have on a yearly basis sent hundreds of thousands of prospective pilgrims to undertake the routines. North African countries like Egypt, Algeria and Morocco are amongst the highest pilgrim contributors.

In what could be described as a blot for African involvement this year, pilgrims from the Democratic Republic of Congo, DRC, were banned over public health reasons.

The country is currently suffering an Ebola crisis which jeopardized the plans of some 410 prospective pilgrims.

“There are people who have been preparing for years, sometimes 10 to put together the $4,250 to make this religious trip to Mecca,” a Congolese Muslim leader admitted.

Mecca, built in a desert valley, is home to the Kaaba, a cube structure that is the focal point of Islam and draped in a gold-embroidered black cloth.

Muslims around the world pray towards the Kaaba, which is located in the Grand Mosque, and pilgrims walk around it seven times. Worshippers will participate in weekly prayers late on Friday morning.

During the pilgrimage separate streams of men and women, grouped by nationality, will travel to Mina on foot or in buses provided by the authorities.

A district of Mecca, Mina sits in a narrow valley surrounded by rocky mountains and is transformed each year into a vast encampment for pilgrims. A total of “350,000 air-conditioned tents have been pitched,” said a Saudi official.

Worshippers will climb Mount Arafat, also known as the “Mount of Mercy”, for hours of prayers and Koran recitals. After descending, they will gather pebbles and perform the symbolic “stoning of the devil”.

That marks the beginning of Eid al-Adha, the festival of sacrifice, marked on Sunday. Pilgrims then return to the Grand Mosque to perform a final “tawaf” or walk around the Kaaba. 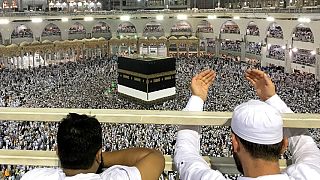 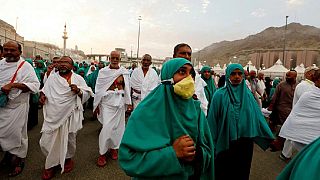 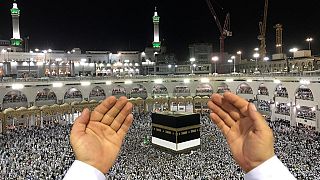