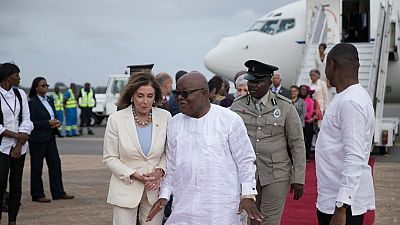 U.S. House Speaker Nancy Pelosi is in Ghana as the head of a Congressional delegation to hold discussions with President Nana Akufo-Addo Monday and to address Ghana’s lawmakers on Wednesday.

While in Ghana, Pelosi and other members of the U.S. Congress plan discussions on “regional security, sustainable and inclusive development and the challenges of tomorrow including the climate crisis.”

Members of the delegation include the House Majority Whip James Clyburn, chairwoman of the Congressional Black Caucus Karen Bass and representatives Barbara Lee and John Lewis.

Pelosi is also expected to visit the Cape Coast and Elmina Castles to observe the anniversary of the first enslaved Africans being shipped to America.

“I consider this to be a fitting and proper way to commemorate the 400th year since the enslaved people were forced to leave their homeland and sent in bondage to the New World,” said Clyburn.

“I seek to pay homage to the sacrifices of our African ancestors and honor the contributions they made to building the United States of America.”

Bass said: “On this delegation, 12 members of the Congressional Black Caucus will return to the African continent as members of the United States Congress. We have come so far but we still have so far to go.

Among the history being made this trip, I am very much also looking forward to witnessing the first woman Speaker of the United States House of Representatives address the Ghanaian parliament.”