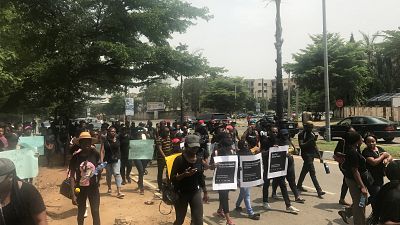 Nigerian police have launched an investigation into allegations that its officers sexually assaulted suspected prostitutes who were arrested in raids on nightclubs in the capital, a force spokesman said.

A number of women who were arrested have said they were not prostitutes. Last month’s raids in Abuja, during which dozens of women were arrested, have prompted protest marches and a social media campaign.

Around 200 people marched on Saturday in the capital, Abuja, bearing messages such as “to be a woman is not a crime”. Protesters said some women who were arrested in the raids, which took place in late April, said they were sexually assaulted by police and in some cases raped.

Women are walking on the street, wearing short skirts and they are tagged prostitutes for nothing

One campaigner who took to the streets of Abuja said Nigerian women were being treated unjustly.

“Women are walking on the street, wearing short skirts and they are tagged prostitutes for nothing,” said Marcelle Umar, a member of Coalition to End Rape, against a backdrop of chanting protesters.

“They go to the club, pack all the women there to arrest them and leave the men who are there,” she said, describing the tactics used by police.

The Nigeria Police Force (NPF) has for years been dogged by allegations that its members have been responsible for abuses ranging from beatings to extrajudicial killings. Allegations of police brutality led to the overhaul last year of an elite police unit.

The NPF has repeatedly denied any wrongdoing with regards to alleged human rights violations by its officers.

“Investigations have commenced,” Usman Umar, deputy commissioner for Abuja police, said on Saturday. He said anyone found to have been guilty of wrongdoing would be “fished out” and punished.

Nigerian police have carried out a number of raids in the capital, aimed on cracking down on prostitution, over the last few years.

“They did all manner of things to us,” said one alleged victim arrested in late April, speaking on condition of anonymity. “They beat us mercilessly – they sprayed us with pepper sprays, they used batons on us,” she said.

Much like the #MeToo movement that has taken hold in other parts of the world, people have used social media to address sexual violence and the treatment of women in Africa’s most populous country.

“Nigerian Police, being a woman is not a crime. Leave us alone,” said Twitter user @ebelee_ on the microblogging website.