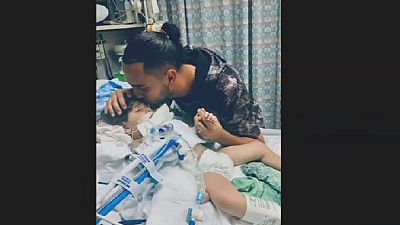 The 2-year old boy who was on life support battling for his life in the United States has died according to the Council on American Islamic Relations.

Abdullah Hassan made headlines around the world when his Yemeni mother was refused visa to enter the country due to President Donald Trump’s ban on some Muslim-dominated countries.

Hassan Ali, 22, father of little Abdullah made an emotional televised appeal asking U.S officials to issue a waiver so Shaimah Swileh can reunite with her son at a children’s hospital in California.

Following his appeal, Shaimah was granted a visa and finally arrived in the United States on Thursday December 20.

Hassan, a US citizen like his father suffered from a rare genetic brain condition and was put on life support at the UCSF Benioff Children’s hospital in Oakland.