When Ethiopia's ex-military chief was arrested, arrival in Addis 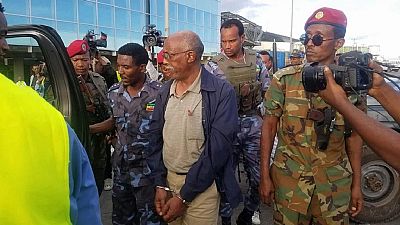 Brigadier General Kinfe Dagnew, a former Chief Executive Officer of Ethiopia’s army-backed business conglomerate, Metal and Engineering Corporation, MetEC, has been flown to Addis Ababa after his arrest on Monday.

Footage shared by state affiliated Fana broadcasting corporate said he had been arrested whiles he tried to cross in Sudan from the Tigray regional state’s town of Humera.

“Brigadier-General Kinfe Dagnew, a suspect in the case, was apprehended around Humera,” an Ethiopia Broadcasting Corporation announcement said.

Dagnew is seen surrounded by border officials, police and military personnel at the border post. He arrived via a helicopter to Addis Ababa where he is expected to be charged with offences relating to corruption during his time at MetEC.

Update: The state broadcaster ETV showed the moment B/General Kinfe Dagnew was placed under arrest near #Humera in the border between #Ethiopia and #Sudan. The report said the general is now en route to #AddisAbeba. He will likely face charges of corruption at a federal court pic.twitter.com/VFWip8Tewn

Although there are reports that there was no arrest warrant specifically in his name, video footage of his arrival in Addis Ababa showed that he had been handcuffed and was under heavy security guard.

Update: Handcuffed & surrounded by heavily armed military men, B/General Kinfe Dagnew, former CEO of #MeTEC, a multi-billion dollar corporate run by the military & is at the center of grand corruption probe, has arrived in #AddisAbeba this afternoon. Vid: https://t.co/oqpN5noiI6 pic.twitter.com/lbRYWdKqsb

The arrests come a day after Attorney General Berhanu Tsegaye disclosed instances of corruption in the financial dealings of MetEC and gross human rights abuse by INSA officials. Over sixty ex-officials of both agencies have since been detained.