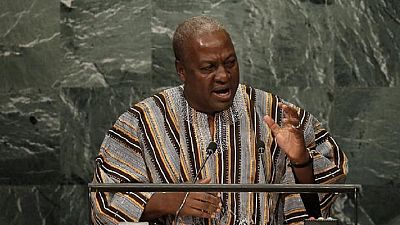 A journalist in Ghana has suffered an infected eye after he received a slap from a security detail of the country’s former president, John Dramani Mahama.

Kwesi Parker-Wilson, a journalist with the Multimedia Group – Ghana’s biggest private media outlet, was diagnosed by doctors as having an infected eye resulting from the assault that occured on Monday.

The journalist confirmed that doctors said he had developed an eye infection “… so I should return on Wednesday for further checks,” he said in an interview with Joy FM, the flagship network of Multimedia.

The former president and his spokesperson have apologized to the journalist over the incident. The Ghana Journalists Association, GJA, has since issued a statement condemning the incident and called for the law enforcement agencies to pursue the issue.

Ghana’s media landscape is one of the freest across the continent. Reporters Without Borders, RSF, in a 2018 report said Ghana was Africa’s best in the area of Press Freedom.

Then vice-president John Mahama became president in late 2012 after the death of John Evans Atta Mills. He saw out Mills’ term and won contested 2012 polls.

He failed in his bid to secure a final term when incumbent Nana Addo Dankwa Akufo-Addo beat him at the December 2016 presidential polls.

Mahama is currently seeking the ticket of the main opposition National Democratic Congress, NDC, to run as its candidate in the 2020 polls.

He is a communication specialist and member of the GJA, before becoming vice president, Mahama held several ministerial portfolios and also served as a lawmaker.