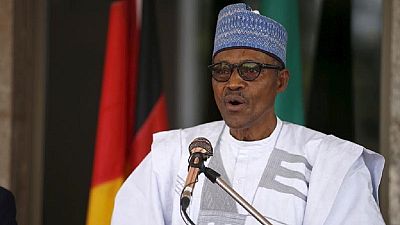 Nigeria’s President Muhammadu Buhari said on Wednesday the country will ‘sign up soon’ to a $3 trillion African free-trade agreement.

Nigeria is one of Africa’s two largest economies, the other being South Africa. Buhari’s government had refused to join a continental free-trade zone established in March, on the grounds that it wishes to defend its own businesses and industry.

I am a slow reader, maybe because I was an ex-soldier. I didn’t read it fast enough before my officials saw that it was all right for signature. I kept it on my table. I will soon sign it.

“In trying to guarantee employment, goods and services in our country, we have to be careful with agreements that will compete, maybe successfully, against our upcoming industries,” Buhari told a news conference during a visit by South African President Cyril Ramaphosa.

“I am a slow reader, maybe because I was an ex-soldier. I didn’t read it fast enough before my officials saw that it was all right for signature. I kept it on my table. I will soon sign it.”

Earlier Ramaphosa told a business conference in Abuja that South Africa saw huge benefits from the continental free trade deal and that a draft agreement relating to the movement of people was being reviewed.

In his first visit to Nigeria since becoming South Africa’s president in February, Ramaphosa said he was seeking greater collaboration between the two countries.

He condemned xenophobic attacks on foreigners in South Africa, including Nigerians, against a backdrop of economic hardship and soaring unemployment.

“This is a working visit to come to Nigeria and I’ve made it a specific issue that I want relations with Nigeria to improve exponentially,” Ramaphosa told the conference.

Nigeria and South Africa have the two largest economies in Africa. Along with Angola, they make up about three-fifths of sub-Saharan Africa’s annual economic output.

Both countries have been hit hard in recent years by low commodity prices that slowed growth, cut government revenues and weakened their currencies. But each has emerged from recession, largely because of a rebound in commodity prices.

The growth of the two economies played a large part in the World Bank’s forecast that sub-Saharan Africa’s economy will grow by 3.1 percent this year, up from 2.6 percent in 2017.

The continental free-trade zone, which encompasses 1.2 billion people, was initially joined by 44 countries in March. South Africa signed up earlier this month. Six countries, including Nigeria, are yet to sign the agreement.

Economists point to the continent’s low level of intra-regional trade as one of the reasons for Africa’s enduring poverty and lack of a strong manufacturing base.

African Union officials said countries that have signed the agreement will need to submit a schedule of tariffs by December, adding that they expect intra-African trade to double over the next four years once tariffs are reduced.