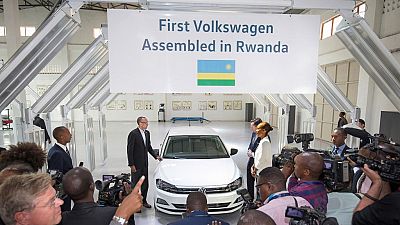 Rwanda’s first domestically built car rolled off the assembly line at Volkswagen’s new factory in Kigali on Wednesday, as Europe’s biggest carmaker taps into demand for ride-sharing to expand in the region.

Despite low levels of car ownership in Rwanda, Volkswagen hopes to both sell vehicles and use them in an Uber-like car-sharing system that will allow people to book rides using their smartphones.

Some will also be sold into neighboring nations.

VW has started a community car-sharing service mainly aimed at companies in Kigali and plans to launch a ride-hailing offering later this year.

The Polo is the first model being made at the site and the German automaker plans to reach annual production of 5,000 cars in the first phase, by also building its Passat, Tiguan, Amarok and Teramont models. The assembly plant uses components shipped from South Africa to Rwanda.

The $20 million investment, which will create up to 1,000 jobs, is as an example of much needed spending by overseas firms in the nation, which receives $1 billion in foreign aid and development assistance but is making business-friendly reforms.

President Paul Kagame, who attended the event, said it was an important step for the country and the continent.

Most of the cars currently on the road are second-hand imports from countries such as Japan.

Car ownership remains low in the nation of 12 million people with just over 200,000 private cars registered since 1997, according to the country’s tax collection body.

But VW, which already builds in nearby Kenya, is expanding in Sub-Saharan Africa where it hopes it can tap into worldwide growth in demand for using apps to make journeys rather than buying vehicles.

“So the big game will be to connect the African brothers; Kenya, Rwanda, Nigeria, South Africa and create an African market. Because then you talking a billion people, and then you can walk away from exporting to America, exporting to Germany, what’s the point. You’ve got the market right here,” said Volkswagen’s South Africa boss Thomas Schaefer

Global ride-sharing companies such as Uber have not yet moved into Rwanda meaning that Volkswagen will get ahead of the game by launching its service there ahead of major rivals.