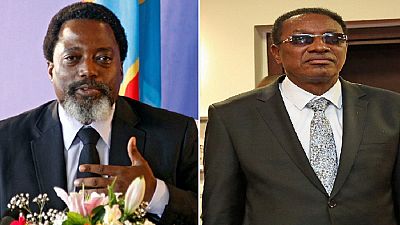 The prime minister of the Democratic Republic of Congo, Bruno Tshibala has stressed that President Joseph Kabila is not planning to seek another term in the December election as his opponents have speculated.

While the constitution bars Kabila from seeking a third term, he has refused publicly to rule himself out as a candidate in a vote scheduled for Dec. 23.

Attempting to extend his 17-year rule would outrage his opponents and risk destabilizing Africa’s biggest copper producer, which hasn’t had a peaceful transfer of power since independence in 1960.

President Kabila has kept on repeating he will respect the constitution.

Kabila’s mandate was extended beyond 2016 after elections that year were postponed.

“President Kabila has kept on repeating he will respect the constitution,” Prime Minister Bruno Tshibala said in an interview Monday at the Conference of Montreal. “This implies that he could not seek a third mandate.”

Tshibala, who spent decades in opposition, was appointed prime minister by Kabila last April to lead a so-called “national unity” government after a deal was struck on New Year’s Eve 2016 between the president’s coalition and opposition parties.

Most prominent opposition politicians rejected Tshibala as prime minister and refused to join his government.

Last week, Tshibala and other serving ministers from the opposition joined the president’s coalition to form an electoral platform called the Common Front for Congo, or FCC, which has Kabila as its head.

Presidential candidates must file their applications to run between July 23 and Aug. 8, according to an electoral calendar published last year.

The FCC’s “candidate hasn’t yet been selected,” Tshibala said. “I don’t see how the president could be a candidate.”

Growth in the Central African nation, which relies on exports of copper, cobalt, gold and other minerals for most of its revenue, averaged 5.5 percent under Kabila between 2001 and 2016, according to World Bank data.

The expansion has slowed in the past two years, with the International Monetary Fund estimating rates of 3.4 percent and 2.4 percent in 2017 and 2016.

The slowdown, from growth in excess of 9 percent earlier this decade, was the result of a slump in commodity prices, Tshibala said.

Gross domestic product is expected to expand 4.8 percent this year, thanks to a recovery in metal prices, he said.

“Most of the indicators are in the green,” Tshibala said. “We think the trend is favorable and we will have much bigger means to carry out our program,” he said.

Tshibala also welcomed the approval last week of regulations that enforce a new mining code — a law that had been opposed by companies including Glencore Plc and Randgold Resources Ltd.