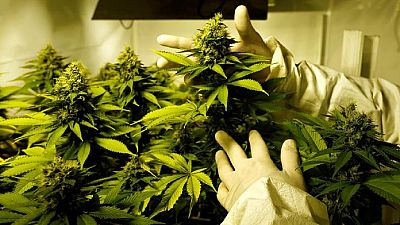 A journalist in Zimbabwe has tweeted that Zimbabwe’s government will charge as much as $50,000 (£36,000) for licences to grow cannabis.

The government announced this weekend that that individuals and businesses would be able to apply for licences to cultivate cannabis for medicinal or scientific use.

Zimbabwe the second African country to legalise growing cannabis after Lesotho did so last year.

The decision on #Zimbabwe‘s ganja project for medicinal & scientific purposes was first made by Cabinet before the coup at the instigation of VP P Mphoko. This followed two successful ganja-therapy trials, initiated by Mphoko, on two skin cancer patients!https://t.co/zlEAyA9v1s pic.twitter.com/jsRbrVq27H

However, the hefty fees and cumbersome steps to be followed before obtaining a licence to grow cannabis may undermine the project.

Producers of cannabis must be licensed by the minister of health, who will verify proof of citizenship or residence and also approve a detailed description of the method that the applicant proposes to use for keeping records.

Applications should include plans of the growing site, quantity to be produced and sold and the production period.

Previously, production and use of marijuana has been illegal in the country and possession of the drug attracted sentences of up to 12 years in jail.