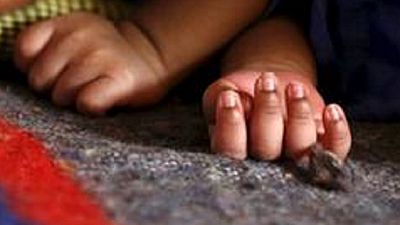 A nine-week-old baby boy has died at a local hospital in the Central Region of Ghana because his parents could not afford the cost of aiding his breathing with an oxygen machine.

According to a local media, Joy fm, the baby died at the St Gregory Hospital at Kasoa.Little Prosper’s parents told Joy News that a medical doctor on duty pulled the plug from the oxygen machine because they could not pay GHS 533 about $ 122 to keep their son alive.

Hospital authorities are tight-lipped on the issue explaining they are investigating the circumstances leading to the baby’s death.

That Saturday, the Doctor came, he asked if I've heard anything from my husband [about the bills] and I said that I didn't hear anything. Then he removed the oxygen...it is too late

Little Prosper was born on January 19, 2018,he fell sick and was taken to the hospital on March 5 and died three weeks later.

The baby’s mother, Sefakor, told Joy News Joojo Cobbinah, that a few weeks after the baby was born she realised he was not breathing well.

According to Sefakor, after preliminary tests, St Gregory Hospital admitted them with the intention of transferring the case to the nation’s largest teaching and referral hospital in the capital Accra, subsequently.

The baby was given blood and kept on the oxygen machine because he could not breathe well.

However, when it became clear the family could not afford the cost of treatment before the intended transfer to the Korle bu teaching hospital, the doctor decided to take a drastic decision.

“That Saturday, the Doctor came, he asked if I’ve heard anything from my husband [about the bills] and I said that I didn’t hear anything. Then he removed the oxygen…it is too late,” Sefakor managed in the little English she could speak.

The baby’s father, Kennedy Kwao, said he chose the name ‘Prosper’ because he was hopeful that the boy will grow up to become a prosperous man.

That hope, however, has been curtailed.