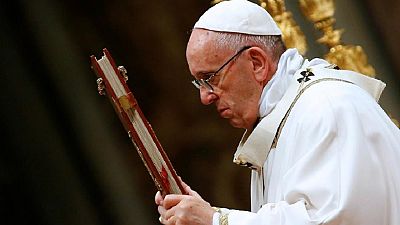 Pope Francis on Sunday expressed concern over national policies dictated by fear, speaking only one week after Italy’s general elections which brought populist and anti-immigrant parties to the forefront.

The pontiff, who has made the defense of migrants a key pillar of his five-year papacy, has repeatedly called for decisive action to solve political problems causing many to flee from their home countries.

Although the pope did not specifically refer to the elections, his words may resonate as a strong criticism of Italy’s center-right bloc which has strongly campaigned using anti-migrant policy promises.

The world today is often inhabited by fear. It is an ancient disease ... And fear often turns against people who are foreign, different, poor, as if they were enemies.

“The world today is often inhabited by fear. It is an ancient disease … And fear often turns against people who are foreign, different, poor, as if they were enemies,” said the leader of the world’s 1.2 billion Roman Catholics.

“There are countries where plans are dictated by the fight against these people,” the pontiff added, departing from his prepared text.

The pope was speaking at the celebrations of the 50th anniversary of Rome-based peace group Sant’Egidio Community, which has helped in the last two years about one thousand refugees, mainly Syrian, reach Italy through so-called humanitarian corridors.

Anti-establishment 5-Star Movement and the League, a center-right grouping that employed the most fiery anti-migrant rhetoric during the campaign, were the biggest winners at Italy’s elections.

A Nigerian campaigning on the anti-immigration League became the first black Italian senator and was roundly criticised by many including Italy’s most famous black footballer, Mario Balotelli.

The center-right has vowed to deport hundreds of thousands of migrants if they are able to form a government – even though that promise will be hard to keep – leaving many migrants in the country pondering over their future.

The League’s leader Matteo Salvini clashed with the Pope several times over immigration during the campaign and criticized him for promoting dialogue with Islam.

The Argentine Pope, the first non-European elected to the post in nearly 1,300 years, has in the past criticized President Donald Trump’s intention to build a wall to stop illegal migrants crossing the U.S. border with Mexico.