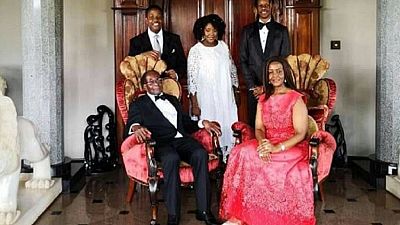 Zimbabwe’s former president Robert Mugabe celebrated his 94th birthday on Saturday with a private black-tie party hosted by his family, three months after he was ousted from power.

Mugabe’s birthday was previously a major public event in Zimbabwe, marked by an outpouring of fawning congratulations and tributes in official media from regime loyalists, government ministries and agencies.

His actual birthday on Wednesday was declared an annual public holiday for the first time this year, but the occasion was greeted without fanfare.

The party is only for close family members and friends. It is not for the public and it is strictly by invite.

“The party is only for close family members and friends. It is not for the public and it is strictly by invite,” Louisa Nyanhongo, a member of Mugabe’s close circle, told AFP.

Mugabe & wife look “safe and sound”-these are the pleasures of life after Office. I wish he had left sooner under different circumstances.He could have preserved his legacy. I hope one day to seat and discuss with this man -have so many questions ZimMediaReview OpenParlyZw pic.twitter.com/upvLke2aAd

An invitation card that appeared on social media said guests would be “celebrating our hero”, alongside a smiling photograph of Mugabe.

The card said the party was at “Blue Roof” — the lavish private residence where Mugabe and his wife Grace, 52, have been living in apparent seclusion since he was forced to resign after a military intervention.

Nyanhongo’s telephone number appeared on the invitation, but she declined to comment further.

While president, Mugabe typically celebrated his birthday with a long speech while wearing a suit decorated with images of his own face at a party that included a multi-course feast.

Vast birthday cakes were a regular feature, with the biggest cake said to weigh the same number of kilogrammes as Mugabe’s age. It took several men to carry it into the marquee.

SUGGESTED READING: No power, no cake: Mugabe ‘unloved’ on his 94th birthday

Mugabe, whose 37-year rule was criticised for brutal repression of dissent and economic collapse, has not appeared in public since his abrupt ousting.

This week, he was photographed with Grace meeting the new African Union Commission chairman Moussa Faki Mahamat in Harare.

In #Harare for my first visit following the peaceful transition of power. #Zimbabwe is indeed open for business! Met with President edmnangagwa and it was an honour to also pay a visit to former President Robert Mugabe. With thanks to foreign minister SB Moyo. #ED100days pic.twitter.com/5quQCEuRRS

The photographs were the first of the couple since his ousting.

Local media in Zimbabwe are reporting that Mugabe has called out the Mnangagwa led government for harassing his wife over her suspiciously acquired PhD.

He reportedly asked the African Union to help ‘restore normalcy and democracy in Zimbabwe’.

.thestandardzim reports on Mugabe's remarks at his birthday party;

* ED proposed a meeting to discuss welfare
* Complains about harassment over Grace PhD, withdrawal of cars & servants
* Only Harare opposition supporters marched. Why listen to them?
* Wants an apology from ED pic.twitter.com/DmjbMfCzGi