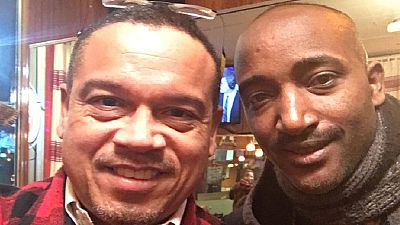 A United States lawmaker, Rep. Keith Ellison, has disclosed part of his motivation for strongly advocating that his country maintains the Diversity Visa (DV) lottery program.

He cited the instance of an Ethiopian academic who made it to the U.S. via the DV program and had excelled.

“Husen Beriso, born in Ethiopia, came to US on Diversity Visa Program; he’s urging me to fight for the program. Has 2 Masters Degrees, teaches and is a PhD candidate,” he said in a Twitter post accompanied by a photo of himself and Besriso.

Ellison, a member of Congress from Minenesota’s Fifth District is on record to have branded President Trump a racist over his decision to cancel the lottery program supposedly over security concerns.

Egypt, the Democratic Republic of Congo (DRC) and Ethiopia have been noted as the three top African countries who will be affected by Trump’s move to cancel the visa lottery regime.

As at November 2017, figures from the Department of State indicates that the three countries had over 2,000 beneficiaries enter the U.S. through the annual lottery program for the year 2016.

The document titled, “Immigrant Number Use for Visa Issuances and Adjustments of Status in the Diversity Immigrant Category,” gave an analysis of DV beneficiaries spanning the years 2007 – 2016.

Husen Beriso, born in Ethiopia, came to US on Diversity Visa Program; he’s urging me to fight for the program. Has 2 Masters Degrees, teaches and is a PhD candidate. pic.twitter.com/BGk73Tv0bC