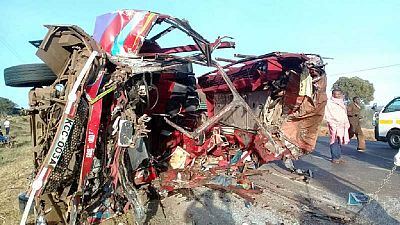 34 people have perished in yet another grisly road accident at one of Kenya’s most notorious blackspot on Sunday morning after the bus they were travelling in collided head-on with a trailer.

At least 28 died on the spot while six others lost their lives while undergoing treatment at a county hospital.

Traffic Police Chief Zero Arome told journalists that the accident occurred at 3am, with indications the bus may have had faulty breaks when it rammed on the truck.

We have 34 dead and two are from the truck

“We have 34 dead and two are from the truck,” he said, “all the bodies have been removed from the wreckage and injured people taken to hospital.”

Police said Sunday’s accident is the worst on that killer highway since the beginning of this month, with the death toll now over 100 on that stretch alone

Kenya Redcross tweeted that 18 passengers were rushed to the hospital with serious injuries.

“Our ambulance teams responded to the scene and evacuated 18 casualties to Molo and Nakuru hospitals. The accident involved a lorry and a bus. More rescue efforts continue.”

Preliminary reports said the accident occurred at around 3:30 am local time after the bus which was travelling from western Kenya collided with the trailer at the notorious Salgaa point on the Nakuru-Eldoret highway.

The bus, which was reportedly speeding, was being driven on the wrong lane.

The accident brings to well over 200 the number of people who have lost their lives in road accidents in the month of December.