Ethiopia arrests 'terror suspect' with over half a million dollars cash 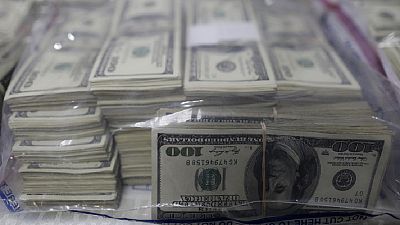 <p>Authorities at a border post in Ethiopia’s east have arrested a man transporting over half a million dollars in cash.</p> <p>Head of communications in the Oromia state said police on Wednesday arrested the suspect, one Habanee Arabnuur, at the Bordede check point.</p> <p>A 34-second video shared by the communications chief showed that money comprised bundles of $100 bills.</p> <blockquote class="twitter-video" data-lang="en"><p lang="en" dir="ltr"><a href="https://twitter.com/hashtag/Ethiopia?src=hash">#Ethiopia</a>- Oromia region pr head posted video saying region’s police apprehended a man traveling with US$541,671 in Bordede, east Hararghe <a href="https://t.co/IUvVXuK7yX">pic.twitter.com/IUvVXuK7yX</a></p>— Addis Standard (@addisstandard) <a href="https://twitter.com/addisstandard/status/900706390666301441">August 24, 2017</a></blockquote> <script async src="//platform.twitter.com/widgets.js" charset="utf-8"></script> <p>He is reported to have confirmed that he took the money from the capital Addis Ababa and that it was meant to fund the activities of anti-government elements trying to incite violence and destabilize the region.</p> <p>Ethiopia’s volatile security situation led to the imposition of a state of emergency in October 2016. The six-month duration was extended after expiry by four months. The parliament voted to lift it earlier this month.</p> <p>Large scale anti-government protests were the reason for the state of emergency but there are instances of armed clashes and bomb attacks that have forced western governments to issue travel advisories for specific areas.</p> <p>The United States and United Kingdom have maintained their security alerts imposed since last October even though the state of emergency has been lifted.</p>