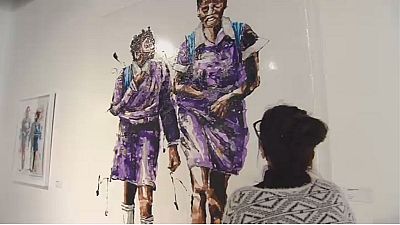 ‘Sugar Tax’ questioned the prevalence of branded soft drinks that litter the environment and have been blamed for various health problems.

By manipulating pieces of recycled plastic with a heat gun and infusing his canvas with water colors, Buthelezi brings portraits and abstract compositions to life in a style that gives the illusion of an oil painting.

I think it's fantastic, I think it's such an interesting medium that he uses, and I think he really takes something that is considered rubbish, or that it is rubbish and he just turns it into something beautiful.

“To put up this exhibition is just a way of saying to people — let’s talk about this, let’s have a dialogue around all these issues that the government is coming out with, because you know, with my work, it’s not only you know the “sugar tax” that one is trying to bring up, but also you know, the environment element you know, and how my work contributes towards recycling and all these things, I mean the whole idea is about recycling. But now if these two things are not properly managed, you know, they might be problematic you know, to us as the society you know, because sugar, part of it if it is not enough or if it is not controlled, properly controlled, it is problematic and yet my body needs it,” said Buthelezi.

Buthelezi says growing up in a poor background, plastic was readily available and he could easily collect and play around with it.

He then discovered his rare technique in his last year of art school in the 90s as he tried to move away from traditional mediums.

Buthelezi can use about 5,000 pieces of plastic for a single piece of artwork.

The artist wants to draw attention to plastic waste and its effects on the environment, but also uses watercolours to create a well balanced composition.

“I love watercolour, you know simply because is a sensitive material, and this is also one of the discussions that we had with the curator to say — look, what can one possibly do, you know, to make the exhibition more interesting and I indicated to him very clearly that look, not so many people know that I do watercolors, you know, and it will be very much interesting for me to bring that experience into this exhibition and make sure that people understand that these plastics are actually informed by watercolor, and it’s very clear in this exhibition, because what I have done, I have exhibited a sketch alongside a finished plastic work, and you can just see the influence from one technique to the next,” he said.

His work has been on show locally and in other countries including the United States, Britain and Germany.

“I think it’s fantastic, I think it’s such an interesting medium that he uses, and I think he really takes something that is considered rubbish, or that it is rubbish and he just turns it into something beautiful, it’s a very optimistic thing, it’s a very encouraging thing to see,” said Lana Ensling, a visitor at the exhibition.

“The work really speaks to me especially in this era of you know, lets recycle, let’s not waste, and you know, try and clean up the environment. I think this is yeah, one of the best artworks I ever seen so far, and I think it deserve to be seen across the world in all the art galleries,” added Irene Zingonhy, another visitor.

Buthelezi was recently presented with an award from the prestigious King Abdullah University of Science and Technology, recognizing him as a pioneer for the use of plastic as a medium.

“It is the award that symbolizes you know, the type of work that I am doing as a pioneer in this medium. So you know, is actually very special because I didn’t know that I was a pioneer, I was just doing my work as an artist hoping that people will see and enjoy and possibly learn a thing or two for themselves. So now you know, to get this, it’s even way beyond what I was expecting, very proud of it,” he said.

Buthelizi says he is always seeking to reinvent art and improve on his creative process, all the while giving his plastic medium prominence and highlighting the need to rid the environment of the harmful waste.

Handmade wooden surfboards: a South African's quest for a greener ride [No Comment]

Handmade wooden surfboards: a South African's quest for a greener ride [No Comment]