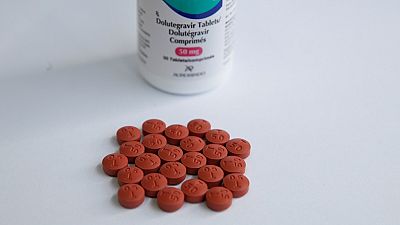 Kenya is the first African country to start using a modern generic version of the latest HIV drug that can improve and prolong the lives of tens of thousands of people who suffer severe side effects and resistance to treatments.

A generic version of Dolutegravir (DTG), first approved in the United States in 2013, is being given to 20,000 patients in Kenya before being rolled out in Nigeria and Uganda later this year, with the backing of the health agency UNITAID.

DTG which was officially launched in the capital, Nairobi on Wednesday (June 28) is the drug of choice for people with HIV in high-income countries who have never taken antiretroviral therapy before and for those who have developed resistance to other treatment.

“This option can come with several advantages, more effective drugs, more effective regimen, fewer side effects and name them. So to us I think in HIV care and TB care there is a reason to celebrate,” said Peter Kimuu, head of policy, planning and healthcare financing at the country’s Ministry of Health.

Doughtiest Ogutu who has been living with HIV for 15 years started taking the drug this year.

She said her viral load – the amount of HIV in her blood – has fallen from 450,000 to 40,000 since she started on DTG and she has not experienced side effects compared to her previous treatment regimen, which included the efavirenz drug.

“Nightmares, you have constant nightmares where you take the drugs and then you go to bed, you are just dreaming of weird things, you are either in a cemetery, or you are dreaming about snakes, or you are dreaming about dead people, funny things, things out of this world. Some people think it’s a myth but it’s a reality. That you actually get to get nightmares, and then with efavirenz, I developed a condition of anaemia, because it would wear me out and drain me and my body cells would not reproduce themselves. So unlike now that you can see me and my flesh looks full of life, you cannot tell whether I’m sick not unless I tell you,” said Ogutu.

The brand name version of DTG is Tivicay, produced by ViiV Healthcare, majority-owned by GlaxoSmithKline.

Sub-Saharan Africa has been at the epicentre of the HIV epidemic for decades and home to nearly three quarters of all people with HIV/AIDS.

UNAIDS aims reach 90 percent of people diagnosed with HIV with antiretroviral treatment by 2020.

In Kenya, about 1 million people are currently on antiretroviral treatment (ART). DTG will first target about 27,000 people before being rolled out countrywide.

Some HIV patients develop a resistance to ARV drugs, which means the medicines do not work on them.

Professor Sylvia Ojoo is the Kenya country director for the University of Maryland School of Medicine and is monitoring the introduction of DTG.

“Eighty five percent suggests that the majority of patients are tolerating their treatment, now the 15 percent could be people who are non-adherent for various reasons, it could be people who are experiencing toxicity, you know or it could be people who failed one way or the other for reasons that may not be clear. So I’d say that the majority of patients right now tolerate the drugs that they are on, that we currently use and the reason that dolutegravir is exciting is that even more people will be able to tolerate it, and you know so therefore it would work even better for the majority. There are other aspects of dolutegravir that is different from our current regimen and that is that the drug itself is less likely to allow for viral resistance to develop,” said Ojoo.

Kenya, with one of the world’s largest HIV positive populations, has made great strides in dealing with HIV.

The country is working with UNITAID to make medicines more readily available and fast, to reduce manufacturing costs by allowing generic companies to access patents for a small royalty and produce them cheaply for the developing world.

Martin Sirengo the head of Kenya’s National AIDS and STI Control Program, says more than two-thirds of those who need treatment are currently accessing ART drugs.

“All the 1.5 million people living with HIV need to be on treatment, as I mentioned about a million and above are already on treatment, so we are looking for about 400,000 because some are already in the system and we are working them out. So it’s becoming increasingly difficult to find the last 400,000 people because some people living with HIV don’t know that they have HIV. So in the same breath we have therefore introduced self-testing, so that Kenyans can get to know their HIV status. So with that in place then the next frontier for HIV really is to move to quality of the services that we provide,” said Sirengo.

The number of new infections in Kenya has almost halved over the last decade to 80,000 a year, he added, thanks to increased testing, treatment and awareness.