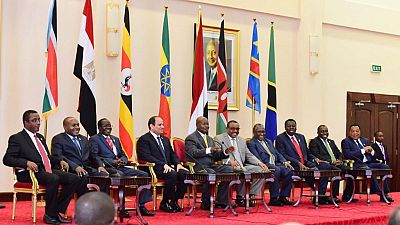 Uganda’s President Yoweri Museveni has called on Nile Basin countries to engage in strategic level discussions on River Nile issues to benefit all the beneficiary countries.

“If you start from the parochial point of what Uganda alone stands to benefit without knowing that Uganda’s prosperity depends on others, then you will lose out,” Museveni said at the first Nile Basin Heads of State Summit on Thursday.

The summit held at Uganda’s State House in Entebbe seeks to find solutions to the issues surrounding the Entebbe Agreement signed in Uganda over the sharing and use of the Nile water.

In 2010, seven of the Nile Basin countries – Uganda, Rwanda, Tanzania, Ethiopia, Kenya, Burundi and DR Congo – signed the Entebbe Agreement in Uganda except Egypt and Sudan who disagreed with the reallocation in favour of the historical water sharing quota.

All Nile Valley countries should be assisted to develop and become first world countries. It is why we called this strategic conference.

Egypt and Sudan subsequently withdrew from the bloc the same year, until 2012 when Sudan rejoined and later Egypt, in July 2016.

They disagreed over Article 14(b) of the agreement which requires members “not to significantly affect the water security of any other Nile Basin States.”

This means upstream countries including Rwanda, Burundi, Tanzania, Uganda and South Sudan cannot undertake any activities like irrigation or dam construction, which could significantly affect Egypt and Sudan’s water quotas.

The agreement, however, allows upstream countries to undertake these activities after consultation with the other beneficiaries of the river.

Egypt, Sudan and Ethiopia who have long-standing disputes over the river signed an agreement in 2015 giving priority to downstream countries for electricity generated by the dam and providing compensation for any damages.

Good to see Ethiopa and Egypt at the same table for the Nile basin summit in Uganda. #TheAfricaWeWant pic.twitter.com/o1Z0kaSLAZ

This was done after Ethiopia started building the Grand Ethiopian Renaissance Dam on the Nile River. It resulted in diplomatic tensions with Cairo criticizing Sudan for backing Ethiopia in the construction of the dam on the Nile which Egypt fears will affect its water needs.

President Museveni called the Summit in March as the chair of the Nile Council of Ministers of Water Affairs of the Nile Basin Initiative (NBI).

He advised that focus should be moved from natural resource to human resource so as to guarantee the security and social transformation of the Nile valley.

“My view is that human resource is more important. Japan, China and South Korea do not have a lot of natural resources but have a large human resource and all of them have among the highest GDP in the world,” he said.

“All Nile Valley countries should be assisted to develop and become first world countries. It is why we called this strategic conference,” he added.

The Nile Basin Initiative was launched in 1999 by nine countries that share the River Nile to develop the river and share its benefits. The countries are Egypt, Uganda, Kenya, Sudan, Burundi, Ethiopia, Tanzania, democratic Republic of Congo, Rwanda and Eritrea as an observer.

“Our common interests are greater and more important than any differences that have tied us down for decades,” he said.

The next summit will be held in Burundi.

The next Nile Basin Heads of State Summit to take place in Burundi. #NBSummitUG pic.twitter.com/BBz14eWK0G