Pope Francis on Sunday made a strong appeal to the world for an end to child slavery as the world marked World Day Against Child Labour.

More than a decade after June 12 was declared ‘World Day Against Child Labour’, as many as 168 million children are at risk or enslaved in forced labour.

The theme for this year is “End child labour in supply chains – It’s everyone’s business.”

The pontiff was speaking at a special Jubilee Mass at the Vatican.

“Today is the World Day Against Child Labour. Let us unite and renew our efforts to remove the causes of this modern slavery, that deprives millions of children of certain fundamental rights and exposes them to serious dangers. Today there are many child slaves in the world,” he said in a speech.

Launched in 2002 by the International Labour Organization (ILO), the day against child labour is observed to give global attention on the issues faced by children across the world and to take effective measures to eliminate it.

“Child labour has no place in well-functioning and well regulated markets, or in any supply chain. The message that we must act now to stop child labour once and for all has been affirmed by the Sustainable Development Goals. Acting together, it is within our means to make the future of work a future without child labour,” Guy Ryder, ILO Director-General said.

The Day brings together governments, employers and workers organizations, civil society, as well as millions of people from around the world to highlight the plight of child labourers and what can be done to help them. 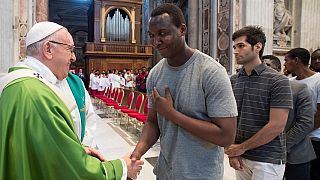 Pope Francis calls for solidarity, mercy to be shown towards migrants

Pope Francis calls for solidarity, mercy to be shown towards migrants