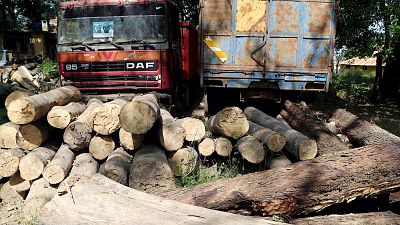 Senegal appears to be losing the battle against timber traffickers who form part of a 100 billion US dollar illegal trade.

In Djibelor Forest, southern Casamance, the last clumps of a dense forest are frequently destroyed by traffickers smuggling timber across the borders to the Gambia.

Forests, part of a huge regional carbon sink, are the last defence against the advancing desert.

When Idrissa Balde, mayor of a small community in southern Senegal, blew the whistle on illegal logging in a nearby forest reserve, he said the government agent charged with protecting the trees proposed a deal to keep him quiet.

Who is going to benefit from this wood? It's the Chinese and the Gambians. The Gambians and Chinese leave their forests to come and exploit ours. They also exploit our people who don't know any better by giving them pennies to keep quiet so they can exploit our forest where we're losing millions and millions.

“My goal was not to make money but to stop and punish these operators, these criminals, by law. As the chairman of the environment committee said, we should withdraw all logging permits for at least ten years so that these operators can go elsewhere and find other activities other than cutting down trees,” the Dabo mayor said sitting on a pile of logs in a clearing where until September, rare African mahogany trees had stood.

The forest ministry in the southern region of Casamance, whose main city is Zinguinchor rejected Balde’s version of events.

Colonel Aly Seck, the ministry’s regional representative denied any corruption attempt and blamed Balde for the destruction in the Dabo forest.

Many African governments have introduced reforms such as export bans on timber which often ends up as furniture or flooring in wealthier countries.

However, the dilemma faced by officials like Balde, many of whom are less inclined to take a stand against corruption, show the limitations of such measures.

Senegal has been a leading African voice for improving the management of natural resources.

A planned “Great Green Wall” from its capital Dakar across the continent to Djibouti in East Africa aims to create a natural forest barrier against the southward expansion of the Sahara Desert.

President Macky Sall boasts Senegal has already restored 25,000 hectares of degraded land under the project and such efforts are helping to win billions of dollars in financing for the region at climate talks in Paris this month.

But ecologists said a combination of logging and shifting rainfall patterns linked to climate change mean nearly double that acreage is lost in Senegal each year leaving behind a bald Savannah where forests were once so dense they blotted out the sun.

“Who is going to benefit from this wood? It’s the Chinese and the Gambians. The Gambians and Chinese leave their forests to come and exploit ours. They also exploit our people who don’t know any better by giving them pennies to keep quiet so they can exploit our forest where we’re losing millions and millions,” said Balde.

Chief among those consumer countries is China. Over the past decade, as African governments have tried to curb illicit logging, Chinese customs data show annual imports of timber products from West and Central African countries have increased more than four-fold to US1.9 billion dollars in 2014.

Hua Chunying, spokeswoman for the Ministry of Foreign Affairs in Beijing, said China strictly regulated timber imports and required its companies abroad to act in accordance with local laws and regulations.

In Gabon, Asian demand has caused a jump in the price of wood from the rare Kevazingo tree, which can take 500 years to grow to its full height of 40 meters (130 feet).

Even more worrying are the countries where there is little evidence authorities are trying to crack down on illegal practices.

Among them is Democratic Republic of Congo, home to much of the Congo Basin, the world’s second largest tropical forest after the Amazon.

The government imposed a moratorium in 2002 on all new industrial logging licenses but campaign group Global Witness said the national laws are systematically violated.

“If there was work here, we would stop what we’re doing. But there is no work here. There are many people but not enough jobs. You have to go into the bush and cut down trees to be able to eat,” said Diediou who gave only his first name, carrying two trunks on a small donkey-drawn cart through the Tanghory state forest.

While much smaller, Senegal’s forests concentrated in Casamance serve as a bulwark against regional decertification and the government has therefore banned timber exports.

But local people claim wood from the region is simply sent into Gambia, a sliver of a country wedged inside Senegal which allows wood harvested in neighbouring nations to be exported via its port.

Most of Gambia’s own forests have been chopped down, but it shipped about US 50 million dollars worth of wood to China between January and October this year, up from US 33 million dollars in all of 2014.

On a recent visit to Digante, a village on the Senegalese side of the border, residents said that a makeshift timber depot had been emptied that same day by Gambia-bound trucks.

A low-intensity conflict between the Senegalese government and Casamance rebels that has lasted four decades has helped to open the door to trafficking, observers say, by impeding forest surveillance.

Buyers, villagers said, typically pay 10,000 CFA francs (US 16.50 dollars) per log and sometimes offer a motorcycle once a supplier has reached a fixed quota, princely rewards in a region where youth unemployment is estimated at around 60 percent.

“This wood here cannot bring rain, we cannot cultivate it, and that’s all the people live on. Where do you think the cattle live? And what about the cows and others? We live off of them. Now, if we start destroying our forest and selling it to other countries, who is losing? It’s the people, not the other countries, especially the local populations.”

In a testament to the state’s efforts to stop the illicit trade, nine seized trucks with Gambian license plates were parked in the local office of Senegal’s forestry department.

Nonetheless, villagers and ecologists said much of the smuggling occurs under the noses or even with the complicity of government agents.

One government agent involved in a scheme to smuggle timber concealed beneath a layer of legal firewood was arrested last month, said a senior forestry official.

Forestry agents in Casamance complained that the dangerous job of stopping illegal timber shipments was hobbled by a lack of resources, both human and financial.

“What’s happening in other forests threatens our forest here too. That’s what our cry for warning is about. What we want is for all of this to stop because we don’t have the means to fight this phenomenon,” said the president of the Dabo commune Environment commission, Abdoulaye Diallo.

However, some officials are trying to make positive changes.

Dissatisfied with the 1.5 million CFA franc (US2,507.19 dollars) fine paid by a man charged with illegal logging in Dabo, mayor Balde says he has filed a legal complaint with the prosecutor’s office.